#TeamTrainwreck 24: For the weirdos and the dreamers!

how he let that lift go in the end. He is so done with this partnership (again

), it really makes it hard rooting for him

Yeah, Bidar was a total a$$hole in the KnC and she is exhibiting some classic signs of abuse.

[*]I could not check Liu/O'Shea skate. Preview shot showed them down and I checked pbp first - no way I am watching this. Hoping everything is 'fine' somehow for them

I've been praying about them, especially her, for the past 13 hours since it happened. I don't recommend anyone watch the video unless they are well and fully prepared to be horrified at how awfully this was handled by the medical staff, event organizers, Meno and the USFS team (not sure if it was the team leader or someone else who went out on the ice).

#Bunnygirl slayed and if I were her, I'd be smiling when Ponsart splats all over the ice, but maybe she's a better person than I am.

If we ever have a watch list again, Gabriele Frangipani should be on it. He is watchable in a trainwreck sort of way.

Was this already nominated for MESS?

I watched all the shorts late at night so not a full recap, just what I remember today:

Ladies:
Anna's "new" SP is a mess, typical The Gauz choreo that throws everything at the wall to see if it sticks.
Fallen Angel Aliona NY is a snooze but Im glad she's fighting back and if the rumours are true, the fighting is not only on the ice.
KOR Battle - Is so hard to pick two for the team but thats not only because of depth but also beacuse they all kinda mesh together. Other than YoungYou hardly any outstanding personality on ice.
Higuchi - Sue me now but I prefer this Goulding version of YourSong to the original. Awful time to pop the axel.
US girls - Liu says thank you.

Dance:
GER guy: After years and years of being in the shadows of OES land he finally gets a chance and blews it in the first steps.
Inefficent Nepotism: I agree is "intense" but mostly due to the music not really the dancing. I wonder if they already heard about the shameful scores the other nepotism team received.
Lopareva & Brissaud: One of the only few that totally nails the street theme of this season. Never lose charachter and a shame this wont be seen at Olys.
Batman & Catwoman : Joker & Harley are infinetly more entertaining.
Reed & LTU: Has she gotten citizenship yet? a weird Eurodance trash number but at least is something others arent trying.
Narcissus & Echo: This is gelling well, I still feel is too much arms but who cares when the synch is so amazing.
Puppy & Legs : going after one of the GOATS really shows how lacking their coverage skills are.
Grandma's Wardrobe Scraps: this on the other hand is losing steam.

Men:
Ponsart: Not much skating quality but so so so so hot. What was bunnygirl thinking.
Frangi: I insist he's a TTW nominee. Brilliant when he was a kid with nothing to lose. A bag of nerves when there's actually something to prove.
Danielian: aweseome step sequence.
Mozalev : This was a good night for great light blue shirts.
Darth Vader: The steps are cool but the first 2 minutes are like what bothering with this.
Le Petit: I struggle to think what's their strategy. he0s obviously not in top form yet so why force it. His atittuted after the falls is deplorable and Im actually glad he was hammered in PCS this time. (though Ill give him a pass after watching he hit his head ouch)
SoldierBoy: 100x times better than his previous outing but at this point he is fighting uphill when he should be already a frontrunner.
YuriOince: That was magnificat level. I like the ponytail is giving him new more confidence and increasing the annoyance/envy of our team Administration.

Pairs:
The Kovalevs: IM just glad to finally see their faces after eons of just reading their names on results threads.
James & Radford: This is the biggest offender of the "emo cover " critiques.
Boikova&KOslovski: Good but Im afraid the spark is lost. #TeamShamelesschampions

Did Rukavicing finally started to train with run throughs??

Now, let's not get ahead of ourselves here. That might be more than they can stand.
A

SamuraiK said:
Reed & LTU: Has she gotten citizenship yet? a weird Eurodance trash number but at least is something others arent trying.
Click to expand...

Denied on first attempt. She submitted another application.
We are getting ready for Ramanuskaite/Kizala's assured last place in Beijing.

I've been half-drafting a Frangipani nomination in my head for a while.

Anyway, just caught up on Schott's skate at Warsaw - CONGRATS!!!

Yokoi - writing my Short recap break.
Bunnygirl- Clean but just pretty not that emotional. Lol at Adam complaining at the PCs. I kinda agree witht e judges this time.
Serna - obscure times are coming for french ladies skating.
Lee - Come on girl dont give up so sooon!!!
Ryabova - classic booring ladiezzzz number.
Lion Queen - Lights out moment during that final sequence. Pure gold.
Chen - key victory over Bell and hanging onto that 3rd spot by the skin of her teeth.
Park - Another pretty but irrelevant KOR girl on ice.
Sinitsina - Losing medal position twice sucks but This will be enough to keep her on the circuit next season. BTW, what happened to Kanysheva?
Fallen Angel - Ahh what 2020 could have been. Still big combos and other than 3A everything damn fine but that program is sooo flat it hurst. You could see in her face at the end she knows her fate is sealed without the confident big arsenal.
ZarAnna - Gasp but what A fighter no doubt about it. I wish the Master and Margarita were used more, that's when you at least see some intent of trying to fit the moves to the music.

Off Comment: Hanretty is such a skating nerd. I love it, specially compared to Simon who you just know only reads the ISU results page on the skater, but I wish he would drop a bit the data dump and comment more on the performance itself during the replays.

Andrea82 said:
Denied on first attempt. She submitted another application.
We are getting ready for Ramanuskaite/Kizala's assured last place in Beijing.
Click to expand...

Or the ISR team at Pyeongchang which I have mercifully forgotten their names.

SamuraiK said:
BTW, what happened to Kanysheva?
Click to expand...

Did she send her flowers?

SamuraiK said:
Did she send her flowers?
Click to expand...

I'm not sure they knew she left.

GER - bye bye, see you again at the crappy streaming Challengers
French kids - those lifts were really struglling and so slow in the end.
Citizen of the World - a bit generic and this results will not help her case with LTU officials but that is a killer dress.
FIN - Im just happy for these two. A truly succesful story of "no future in singles" chosing the right switch and really improving.
Inefficient Nepotism - Ouch ouch. Momma's arm is large. If only we were back in the days when Sleazy Dad had politikal push. This daughter actually has pressence on ice and potential.
L&B - worthy succesors. I see some good future with them.
PomPom - This is a citizenship battle Im selfishly glad was lost. Gimme GreenParsons avant garde over this dull crap anytime. NOt even the badly pasted "lets go clubbing " end saves it.
PUppy & Legs - Uhmm I like it but the flow and full speed for topping podiums is not there. NO GPF for them.
FreakFolk - Officially torn between these two and Hubbell/Donohue for the bronze.
Narcissus & Echo - mesmerising as always. I prefer the red top on him though. They are unreachable and looking at the post 2022 dance scenario I wouldnt mind doing a comeback ala VM.

I bet Trankov's outfit are a reflection of him having to travel for Minor events:

SamuraiK said:
I bet Trankov's outfit are a reflection of him having to travel for Minor events:

Aymoz- REDEMPTION!!!! Program so so but a very emotional and french music choice and if it skated clean at Beijign like today it will be a moment.
Frangi - bounce back for Euros please.
Bunny Ex - My First thought was "why is he doing Sinatra dressed as Elvis?", then I realised it was an Elvis cover!! XD. This is a guy who also never had stamina so good for not splatting all over.
Mozalev - great for landing stuff but this was skated still too junior-ish for my taste.
Danielian - that went downhill fast, hardly any power on the second half.
Vader - how the hell he landed that luzt combo. Messy all around. PCS overly generous.
AlaskanCowboy - His joy of skating is infectious. Cool crowd pleaser.
SoldierBoy - Elegant as always but that speed has deteriorated. Could mishin take him? Im starting to hate what Rukavicin is doing for the RUS guys.
Shun - I detest Phantom but this kid is going places. Call me sacrilegous but I wouldnt mind at this point a JPN team without Yuzu.
Teletubbie - lesson learned, stick with your gifts. Quads are just not your thing. Door open for Semenenko.
YuriOnIce- Lambiel's accent was the best part.
Yuma- yummy jumps but the program leaves me a bit cold.

I'm not sure Dima's work ethic and Mishin's expectations would mesh very well. In fact, I'm pretty sure they would not. I'd like him to work with Dudakov, but again, the whole work ethic thing. If you don't train like Anna and Sasha and the rest of the girls, you don't last long at Sambo-70.

I will do the full calculations this evening after Fadini finishes his competition at Skate Celje (not that he will have any significant impact on the race...) but yes, I have Frangi around 24 point ahead of Memola. And Memola is not entered at Senior Nationals

SamuraiK said:
Frangi: I insist he's a TTW nominee. Brilliant when he was a kid with nothing to lose. A bag of nerves when there's actually something to prove.
Click to expand...

At last, some fresh blood on the

taz'smum said:
At last, some fresh blood on the

Lol. Hey, @Jeschke just added K-Chen after Skate Canada and she proved her worth already at IdF this weekend!

FD is such a beauty. One of my favs of the last decade. I just wish they would not switch music to end.
Click to expand...

taz'smum said:
At last, some fresh blood on the

It hasn't been that long since Karen Chen hopped on the

(and from a correct outside edge).
L

Not sure, why everyone missed , the taller you are the scarier the fall on the ice.
If Kromykh stops being consistent and she gets dropped by Eteri , she might be a candidate here.

she had 2 falls, one from the quad and the other one were both 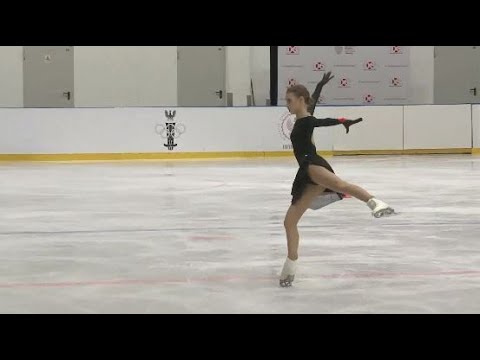 youtu.be
You must log in or register to reply here.

#TeamTrainwreck 19: The Journey of a Thousand Miles Starts with a Single Splat
43 44 45