Ukrainian skaters' migration to other countries

I know Nadiia Bashynska has said her family moved to Canada for the lifestyle, not just skating (and her partner moved from the UK to skate with her). She was supposed to get her citizenship at the end of March but it was delayed with what's going on right now.

But she also mentioned a bit about the Ukrainian skating federation in that interview, and it sounds like that was a part of her and Peter choosing to represent Canada.

Mainly, I think you [Peter] moved because of me, and I moved because of the lifestyle. If you look into Ukraine and the history of all the skaters, there's a lot of good skaters that moved away to different countries. It's sad, but there's not a lot of potential, like these countries like Canada, America, Germany, other countries, you have a little bit more potential, in terms of funding...
Click to expand...

Ukrainian gymnasts / skaters have always been among the most talented. Lilia Podkopaeva, Tati Volosozhar, Aljona Savchenko - such spunky, resilient, strong, and full of life women. Great role models. It's a bloody shame Ukraine can no longer support elite sports.

If I remember correctly, Halyna Kukhar (coach of Savchenko, Volosozhar, Bychenko, etc) encouraged her skaters to find opportunities outside Ukraine.

Anna Pogorilaya? If I right remember she is Ukrainian

Pogorilaya was born in Moscow.

lala said:
Anna Pogorilaya? If I right remember she is Ukrainian
Click to expand...

there is also an issue of coaches leaving Ukraine... for example Alysa Liu's former coach Laura Lipetskaya and her parents are from the Ukraine region of the former USSR territory. There is another coach at that Oakland rink and he is also from Ukraine...
L

Tinami Amori said:
there is also an issue of coaches leaving Ukraine... for example Alysa Liu's former coach Laura Lipetskaya and her parents are from the Ukraine region of the former USSR territory. There is another coach at that Oakland rink and he is also from Ukraine...
Click to expand...

What is THE UKRAINE REGION? Never heard of it. It's Ukraine. You're welcome.

Tinami Amori said:
there is also an issue of coaches leaving Ukraine... for example Alysa Liu's former coach Laura Lipetskaya and her parents are from the Ukraine region of the former USSR territory. There is another coach at that Oakland rink and he is also from Ukraine...
Click to expand...

And she's been here for more than 25 years.

Jayar said:
And she's been here for more than 25 years.
Click to expand...

Efim and Bella Lipetskies (Laura's parents) with Laura's older brother Tolya (Anatoly) came to USA/Calif. in 1979 three and a half years after my family came to North Cal in 1975. As i said above her family came from Ukraine region in USSR.

Laura learned to skate in USA, and became a coach in USA (initially just to try). She studied at UC Berkeley, and now besides ice training, hold Marketing & Real Estate Agent professions (which is not known to me if she still practices the later or not).

But Ukraine lost a future skater and a coach by making it so difficult for families like Lipetsky and many more to live in their own land/country. I know Laura as a skater did win much, but her skates were still better than any Ukrainian ladies of her times. 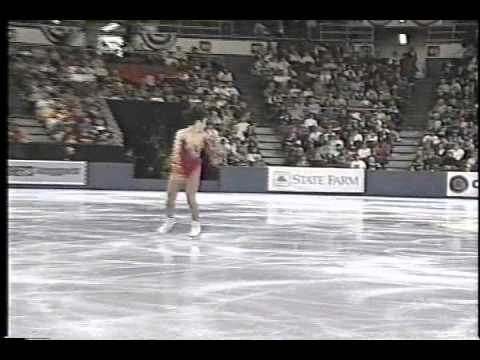 While major cities like Moscow and Leningrad (today's St. Petersburg) had mostly administrative form of anti-semitism (limited quotas and control of opportunities in education, employment and sports), in the cities and towns of Ukraine it also came to cases of violence and verbal abuse in public and in private between neighbors, co-workers and even friends.

Even today, some skaters' families who left Ukraine and moved to Israel for example, did not do it so their kid can skate there, but in order to avoid anti-semitism.

I recall Bychenko telling his story that although he was the best male skater in Ukraine at that time, the Federation did everything to hold him back. So he switched to skate for Israel.

It is true that exits of athletes from Ukraine are mostly for "better life and opportunities or a partner or financial", but for athletes and families with jewish roots the change of country has to do with much more than the above reasons.
You must log in or register to reply here.