#TeamTrainwreck 22: Every dark cloud has a pewter lining!

So crowded, Ross&Cat didn't make the cut either!

Check her IG-story.
Romain: “We’re turning into a rabbit rescue”

Kevin's SP KnC has to be considered for Tursy-Pots.

WTT Day 1
Ice dance
Komatsubara/Koleto: Tim Koleto is not who I think of when I think of a person having soul.
Galyavieva/Thauron: Enjoy the WTT, you two, there'll be no Olympics or home Worlds next year.

Soucisse/Firus: Styling has definitely improved over last season, and Lane seems to have decided they need to slow down a bit to avoid falling so much; if so, success. But levels are still not good.

Hawyek/Baker: Love this program, will miss it.
Guignard/Fabbri: Curse whoever told them to ditch their original RD. Fantastic skills, obviously, but program doesn't suit them at all.
Sinitsina/Katsalapov: Twizzle GOE

Ladies
Negrello: I have never seen her before. Cool music choice, solid jumps and presentation.
Daleman: The past few years have so lowered my hopes that I'm just glad whenever she doesn't injure herself or look completely devastated after skating.

Mazzara: Maybe not improving at quite the rate I was hoping for last season, but with conditions being what they are, allowances can be made.
Serna: Program choice.

MESS candidate on the triple flip.

Schumacher: This program is perfectly tailored to her range as a performer. Best 3-3 attempt she's had in long time. TCC jump coaches really need to figure out her rotation issues, though.
Gutmann: Beautiful performance skills; not perfect on tech, but improvement from Worlds. (((Tornaghi)))

That flow, those edges.
Tennell: Not her best either, but improvement from Worlds. It's a shame Amber couldn't have gotten one of these post-nats assignments.
Tuktamysheva: Really smooth. Which also makes me concerned, given the rollercoaster that her career has been.
Shcherbakova: One must admire how she keeps powering along no matter the obstacle.
Kihira:

JSF, get your stars away from Lambiel before it's too late, Part I.

Men
Semenenko: He's got jumps, but not a lot else at present. But that may be enough, men's skating being what it is.
Sadovsky: Bossman pleased? Round 1 of the race for Nebelhorn decisively goes to him.
Siao Him Fa: Slightly off on the jumps, but awesome step sequence.
Kolyada: Program is not a natural fit for him at all, but good job. And he bamboozled the judges into thinking that 3A exit was a twizzle.
Nguyen: Ouch. And it really doesn't help him that nationally he's in direct competition with two of the best spinners in the men's field.

MESS candidate.
Aymoz: Very nice. But still being coached by Fontana is now a real minus for me.
Brown: Yeah, Jason, let's get that second Olympics!
Uno:

JSF, get your stars away from Lambiel before it's too late, Part II.
Hanyu: So much fun, even (or including) the acrobatic Axel landing.
Chen: Has completed the traditional season-long molting of his costume.
Last edited: Apr 15, 2021
M

Might be the only thing left that could defeat him!

Misha looks like he is having so much fun in that video.

I wished he would stay with the 'After the nightmare' program!

Introduction for Daleman is campaigning hard for new thread title: 'A Lifetime of Ups and Downs'

Well he could call himself lucky, Nazarychev wasn't in the event. 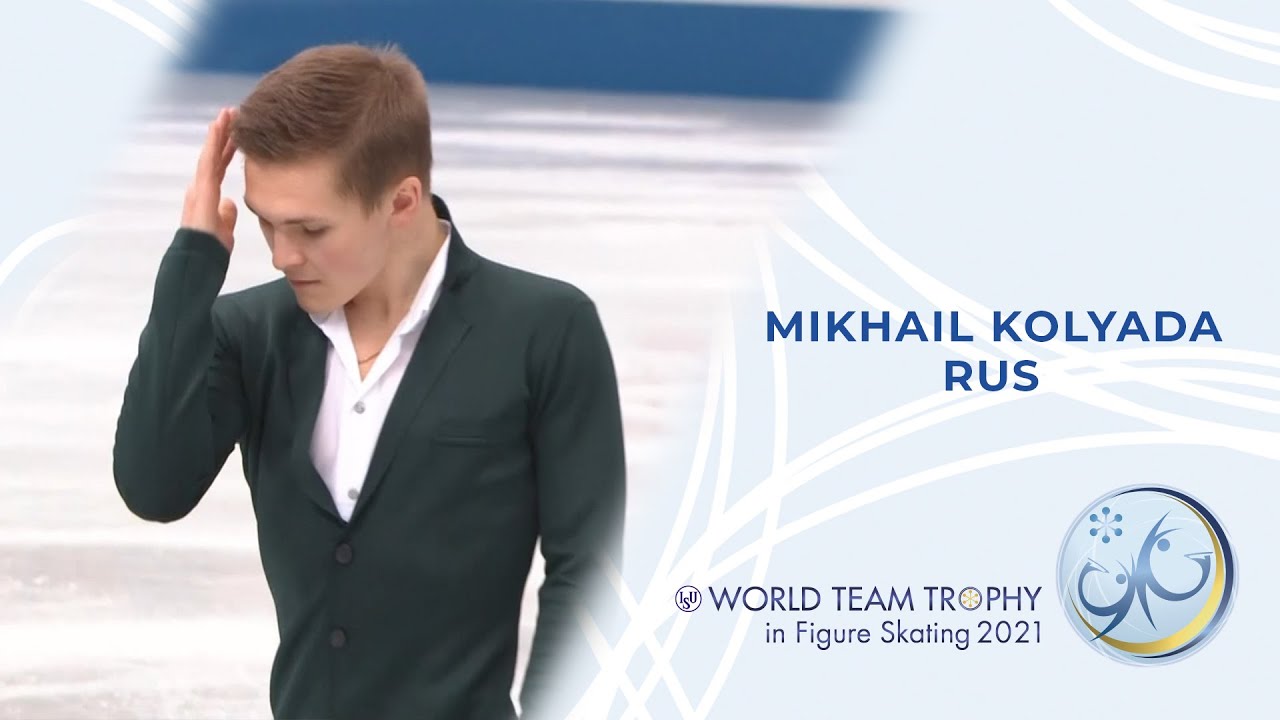 
Romsky. He is so smooth and has such a good touch to the music!
Tuk.
Chen1:

Chen2: I need the 'Slow dancing in the big city' FS back for olympics.
Sakamoto. Skills to die for.
Brown. I don't even start (and I like the program for once, but...)
Semenenko. Best look in knc with sunglasses.
ITA. Pmaol that the girls are scoring higher than Grassl.
Negrello. Awesome program and great GoT music.
Babs. True star of the event!
Firus. Do-hard list.
V

Musings from the Press Office:

Men
Semenenko: Reminds me of a young Kolyada, right down to the substandard music and costuming.

Siao Him Fa: Babou without the charm.

Aymoz: KnC was worthy of the Tursy-POTS short list. He embodies everything good about

Brown: The way he curves his back irks me.

Hanyu: Not my cup of

Ladies
Negrello: I love it when the first time I see a particular skater compete, she is polished and skates well.

Daleman: Who is advising her on her music selections? Mako Yamashita?

Gutmann: Lovely after the miscue, but she may be eclipsed by Negrello at any moment.

: As I have said before, she does meet all the Criteria.

Sakamoto: The power, the finesse, the edges, the smile, the way her coach pulls her ears before she skates!
Tennell:

Ice Dance
No Narcissus & Echo, no

, no Hubbell & Donohue, no Gilles & Poirier, no sprog, no

I didn't bother to get up to watch the dance FS or pairs. I looked at the pair results and the US was beat by the Japanese. Sleeping was indeed the best decision.

rfisher said:
I didn't bother to get up to watch the dance FS or pairs. I looked at the pair results and the US was beat by the Japanese. Sleeping was indeed the best decision.
Click to expand...

That’s because the Japanese are sooo good, they have that little extra something. And Kihara is a gem!

(both pairs made a mistake)
V

Cross-posting from Board Business

Help! I got an Alert that said, "mjb52 mentioned you in a post in the thread 2021 World Team Trophy Men SP & FS - Roman, Nam, and Adam on the Road to Nebelhorn." When I clicked on the link, however, I was taken to this:

I want my hair back immediately! Otherwise, there are going to be some major changes around here.

I can't keep you two straight! I'm still not sure who the big(ger?) Paul fan is. I will blame my aging memory.

WTT Day 2
Pairs
Matte/Ferland - this is a really cool program, but I don't think they've ever performed it to its potential.
Knierim/Frazier - I feel like these two were burdened by the expectations of how solid their domestic competitions were.
Hamon/Strekalin - wow, best short program I can recall from them. Undermarked, in my book.

Miura/Kihira - really developing into a solid pair. He's 28, but I hope they go a few years post-Beijing, it'd be a shame to lose this team so quickly.
Della Monica/Guarise - program doesn't play to their strengths, but this is the best they've looked in a while.
Mishina/Galliamov - oops on the Salchow, but in this field that really doesn't matter at all. Victory lap for these two.

Ice dance
Soucisse/Firus - again, styling has improved. But the slowed-down approach, while good at avoiding falls, hurts the programs. Hopefully whatever retooling they're doing has progressed further next season.
Komatsubara/Koleto - generic but solid. I'm rooting for these two to make the Olympics.
Galyavieva/Thauron - bringing the voids.

Hawayek/Baker - Kaitlin's starting to just look dispirited rather than angry.
Guignard/Fabbri - I'm glad these two got an event this season where they got to place so high, since they're chronically disrespected.
Sinitsina/Katsalapov - it was fine, I guess.

Men
Nguyen - his program content was a bit watered down, even if he'd been clean, so I wonder if he's had some training or injury concerns.
Grassl - big improvement over yesterday. Program pales in comparison to Taljegard.
Uno - cool 3A-4T attempt. Otherwise, the Lambiel experiment really should be over at this point. Shoma can't rest on his laurels with Kagiyama moving up.
Siao Him Fa - the departure from Joubert's camp is really showing on the jumps.
Semenenko - remarkably consistent.

Kolyada - threw in a popped jump at the end to maintain form as well.
Aymoz - I was wondering if he'd take this opportunity to try the 4S in competition, but I guess not. Always energetic.
Brown - quad attempts seem to be more reliable now, progress. Triples gave him trouble.
Hanyu - overall a recovery from Stockholm, but he's clearly the underdog now.
Chen - seems to have the ability to be messy only when he has room to be.

Tursy-POTS is way too crowded this season

Jeschke said:
Tursy-POTS is way too crowded this season

Being able to compete again unleashed the Tursy Mom in everyone.

Vagabond said:
Being able to compete again unleashed the Tursy Mom in everyone.
Click to expand...

Jeschke said:
Tursy-POTS is way too crowded this season

We can live with a huge Tursy-POTS this season, there ain’t been that much else.

SmallFairy said:
We can live with a huge Tursy-POTS this season, there ain’t been that much else.
Click to expand...

Speaking of, where has NadinWhite gone?

Swipe to 2nd shot! Tsareva at her best, Sakamoto‘d her student

Uno - cool 3A-4T attempt. Otherwise, the Lambiel experiment really should be over at this point. Shoma can't rest on his laurels with Kagiyama moving up.
Click to expand...

I'd be interested in seeing what Tomono could do versus Uno, who has seemed really off these last few competitions.

Speaking of, where has NadinWhite gone?
Click to expand...

Jeschke said:
Swipe to 2nd shot! Tsareva at her best, Sakamoto‘d her student

To be Sakamoto'd by one's own coach. Harsh.
V

rfisher said:
To be Sakamoto'd by one's own coach. Harsh.
Click to expand...

#TeamTrainwreck 19: The Journey of a Thousand Miles Starts with a Single Splat
43 44 45