Considering that James and Radford have yet to compete as a team together, Hersh is either very confident, brave, or outright insane to make that kind of prediction.

Furthermore, who'd have thought that the current world champions only placed 4th at Russian Nationals. Such is the depth of talent in that country.

But then, I guess anything could happen in Beijing.

Foolhardy Ham Lint said:
But then, I guess anything could happen in Beijing.
Click to expand...

I don't think that 'anything' could happen. The judges have more or less made their decision about whom they favor before the Olympics, particularly in ice dance, given that it has no jumps and is easier to predict. Though I hope it's better now with CoP, than it was with CoP.

I can't see J/R beating the two Russian teams or the Chinese. I think even P/J will have an advantage over them, given that they are competing at home. S/H appear a lock for gold, unless they mess up - which I think is unlikely.

I could possibly see J/R sneaking into the top 5, but think it's unlikely because they are such a new team and haven't spent time together in high stress competition situations. Granted, both have done so with other partners, but they have only just began to mesh as a team and learn how to work together.

I read once that it takes a new pair about two years to gel. Maybe it will faster for these two elite and accomplished skaters, but even so, time is in short supply.

I'm sorry there is no longer a competitive professional circuit. Because, if there were, James and Radford would romp it in.

Volosozhar/Trankov and Savchenko/Massot were both competitive very quickly. I know they didn’t have time away from competing and that could make a difference. But I don’t think top 5 is impossible at all for James/Radford - if they skate clean of course.
B

miffy said:
Volosozhar/Trankov and Savchenko/Massot were both competitive very quickly. I know they didn’t have time away from competing and that could make a difference. But I don’t think top 5 is impossible at all for James/Radford - if they skate clean of course.
Click to expand...

V/T had 9 months of training before their first big competition (nationals), and S/M didn't compete their first year together while waiting for his release. I'm curious to see how J/R do with less training time than those 2 teams. Lifts are still the big question mark for me.

KMT & Michael, Vanessa & Eric and Evelyn & Trennt all got two Grand Prix assignments, while Lori-Ann & Thierry got the third at SCI. I was wondering if the fed might leave that last one a TBD for now, but probably the summer season is going to be extremely limited so minimal chance for anybody else to make a case.
T

James and Radford potentially being top 5 right from the start isn't that much of a stretch of the imagination IMO. You have all the Russians and Sui/Han, and then there's a bit of a drop in that next group. Peng/Jin (she) never seem to be able to get through both SBS jumps, and we all know the story of each American team. To me, M-T/M lost all their momentum last season and I think they will be extra motivated this year to beat Radford especially, but we will see how it goes.

Savchenko and Massot (remember, he being way less successful than James/Radford) were able to show up at Worlds about a year and a half after they started training together and end up on the podium. J/R have been skating together since December or so, which only puts them a few months shy of that same amount of time. I'm not someone who is a believer in this 'they need so much time to gel, so much time to get programs down' rhetoric that we often read in articles and comments. If they can get through the majority of their big elements (and not necessarily all of them), they could be right up there. These are two athletes that know the work that needs to be put in to get to the top. The biggest question mark for me is Radford's conditioning.

National team announcements: Basically, in all disciplines, it's everybody who got a Grand Prix assignment. This is a big feat for Lori-Ann and Thierry.

PATINAGE QUEBEC has published the pairs who have met their criteria as of June 23 on their website here: https://patinage.qc.ca/developpement/

Does this mean Stellato has been released by USFS?

Next week the NextGen camp will be having a simulation (that includes some senior teams), and they've put up the start orders:

I hadn't realized that Laurin & Ethier had to move up to senior this year.

Link to the Kiss & Cry section thread for the NextGen Camp & Simulation (pairs' programs are scheduled to be streamed on Wednesday & Thursday, July 21-22): https://www.fsuniverse.net/forum/th...imulation-july-19-24-kingston-ontario.108441/

Colonel Green said:
I hadn't realized that Laurin & Ethier had to move up to senior this year.
Click to expand...

I believe he ages out of junior, guess that would be why
S

Speaking of Brooke McIntosh, it will be fun to see her younger sister Summer compete in Tokyo next week in multiple individual freestyle swimming events and probably the 4x200m relay as well.

I really like the pairing of Patricia Andrew and Steven Adcock, loved their short program. So much smoother than her previous partnership with Daleman.

In a CBC news article about Brooke McIntosh's sister Summer, it was revealed the girls' dad Greg has been battling cancer since January

Back in June, the Canadian Olympic swimming trials were held on Father's Day and the swimmer's dad, Greg McIntosh, was brought up on the big screen inside the venue for a post-race interview.

"That's my dad," Summer said, smiling as her eyes lit up. She waved.

Greg, appeared to almost be at a loss for words, before he composed himself.

"She works so hard. It's so amazing to see her get rewarded for the hard work she puts in," he said. "She deserves this.

That was the first time in weeks Greg McIntosh had been out of bed. He's been battling cancer since January.

"He should have won an Academy Award for that because he literally hadn't left the bed," said Jill McIntosh, Greg's wife and Summer's mother. "That was his first time getting in the shower and having a shirt on."

When Greg was diagnosed with cancer in January, the family made the difficult decision to to split up geographically to minimize the *********-19 risk. Greg moved into a place near the Princess Margaret Cancer Centre in downtown Toronto, Jill and Summer rented a condo near the pool in Scarborough, Ont., and Greg and Jill's other daughter Brooke — a competitive pairs figure skater who competed at the 2020 Youth Olympics — stayed at the family home in nearby Etobicoke.

"When Brooke was skating I would go to the house and fill the fridge up. I couldn't be in contact with her," Jill said. "And then with Greg I'd triple-mask and help him when I could.
Click to expand...

Such a difficult time for the family, and undoubtedly tough for Brooke to be separated from her parents and sister.

So based on NextGen camp, we now have multiple teams where the twist is arguably their best element, which is a new thing for Canadian pairs.

chantilly said:
Personally I really hope that Nic Nadeau changing to pairs happens and works out.
Click to expand...

Is he teasing us fans with this recent video clip?

Natasha Purich posted on her Instagram that she tore her Achilles.

No video clips but pictures posted if Brantford pairs on Danielle Earls Instagram Purkiss and a few of the skaters have also posted some.
hopefully Evans will post some new videos, it’s been a while but he’s usually the one to do them
C

danafan said:
Natasha Purich posted on her Instagram that she tore her Achilles.

. I've enjoyed watching Natasha compete over the years but this young woman is so prone to injury, I fear she's going to put herself into a wheel chair. At what point does one call it quits? Hoping for a speedy recovery.
L

. I've enjoyed watching Natasha compete over the years but this young woman is so prone to injury, I fear she's going to put herself into a wheel chair. At what point does one call it quits? Hoping for a speedy recovery.
Click to expand...

This. Honestly, she has the worst luck with injuries. It seems like it's not meant to be for her

I've had a soft spot for her since Nationals in Moncton when her and Sebastian won silver in juniors. Her family was sitting in front of us and they all seemed so nice. She didn't mind they finished second because more importantly "her and Seb had a moment" with their program.

Tuning up my Body of Work 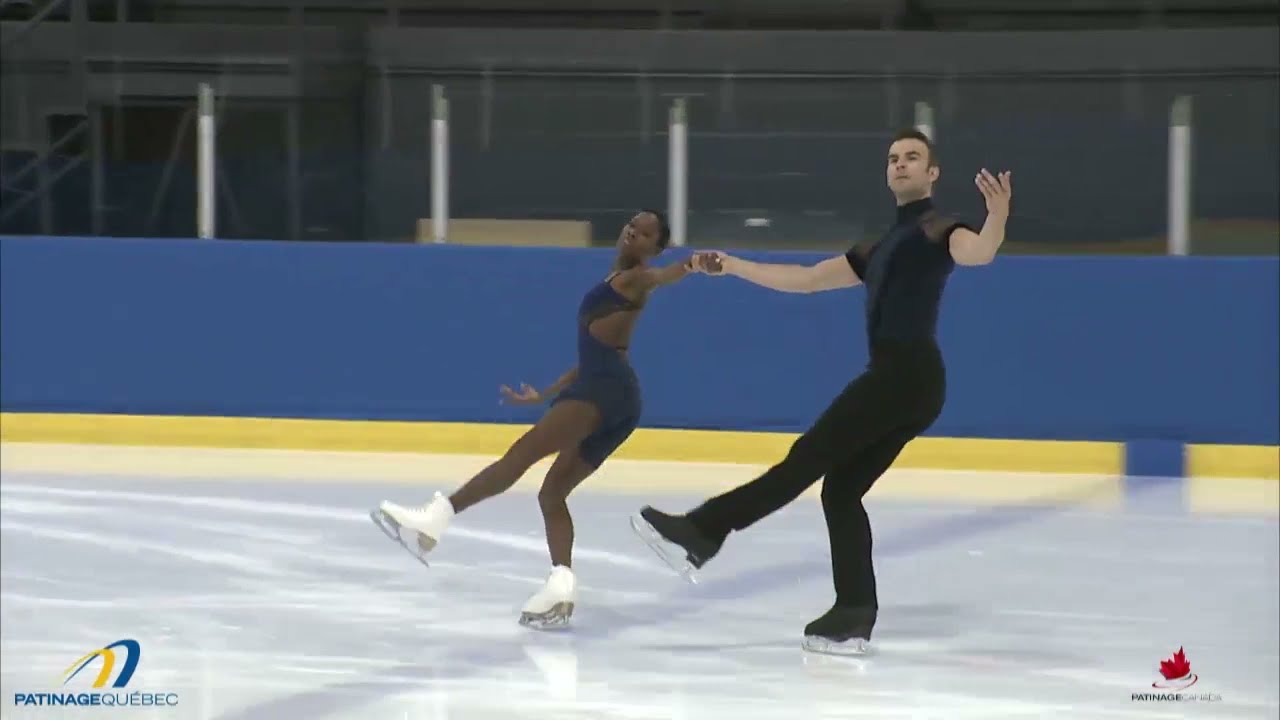 A bit rough, as was only to be expected for their first competition ever, but two things stood out to me - that they're already starting to develop an identity of their own on the ice, that fuses things from their previous partnerships but doesn't see them skating as two disconnected remnants, and that the endless problem with J/C's spins was not the spins, it was Cipres and his inability (refusal?) to time to James.

It's also interesting to see her having a detailed technical conversation with her partner and coach after a competition skate that actually looks like a conversation. It must be refreshing after so many arguments.

Not a fan of the music, but Vanessa really shined.
T

Ohhhhh- I really love them together.

The Knierims and I simultaneously breathe a sigh of relief upon watching this videoclip. I am reluctant to dampen the pro-Canadian sentiment here,but this was lethargic and pedestrian at best. Perhaps someone should inform these two the discipline they compete in is titled PAIRS. They do not skate as one.

I am perplexed by this persistent trend of male skaters wearing sheer costumes. It ruins the body line. Frankly,I find it borderline inappropriate and some even may find it is in violation of the ISU's "not appropriate for the discipline" rule.

I freaking loved it. They are so dancey. Whoopee. Now let's look at the LP. This was refreshing.
You must log in or register to reply here.