Conrad had a decent free, from the look of it.

Are these suppose to be in order? If so Conrad’s total is higher than Keegan’s.

In order by total score, mackie

Keegan's debut of his SP to "Never Tear Us Apart" performed by Joe Cocker: https://www.youtube.com/watch?v=0x_P8v2RVy0

ETA that Keegan's FS music is "Home" by Phillip Phillips (his program didn't look quite ready for performance yet so I wouldn't be too concerned by his score or protocol): https://www.skatinginbc.com/sites/default/files/results/ss21seniormenfp2dro.pdf
Last edited: Aug 17, 2021

I am guessing he couldn't get clearance for the INXS original

Keegan is back at the quad Lutz.

Colonel Green said:
Keegan is back at the quad Lutz.
Click to expand...

Seems obvious Sadovsky gets the Nebelhorn spot as Nguyen hasn't skated yet. Maybe a skate off at Autumn Classic between Phan and Orzel for the Skate Canada TBD. And hopefully Toman gets something as his protocol from the Ontario competition was the best he has skated in a while.

Nam and Keegan are doing an instagram live right now. I guess the High Performance Camp is happening this week. Nam mentioned that he has a challenger but he doesn't know if he's allowed to share because it's not published yet. (Same with Keegan). Nam did say that he signed an acceptance letter for the challenger assignment.

Nguyen, Phan, and Orzel are assigned to Autumn Classic. So possible skate off between Orzel and Phan for the final Skate Canada spot.

danafan said:
Nguyen, Phan, and Orzel are assigned to Autumn Classic. So possible skate off between Orzel and Phan for the final Skate Canada spot.
Click to expand...

I wonder about Stephen Gogolev. I would have expected him to be in the mix for the Skate Canada spot as well. Has he been assigned to any events yet?

screech said:
I wonder about Stephen Gogolev. I would have expected him to be in the mix for the Skate Canada spot as well. Has he been assigned to any events yet?
Click to expand...

He is registered for Ontario Sectionals, so he must still be skating

Wesley Chiu is leading at JGP Courchevel II by over 13 points after the SP. Fingers crossed that he does equally well in the FS.

mackiecat said:
He is registered for Ontario Sectionals, so he must still be skating
Click to expand...

Gogolev has been training continuously for the past two years in LA except for some timeouts for growth spurts and whatever. He has been training at the Granite Club for a couple of months now. It will be so good to see him back on competitive ice again.

Roman Sadovsky is listed on the Skate Canada site as going to Nebelhorn (not a surprise but now official): https://skatecanada.ca/events/#tab-id-2

Stephanie said:
Roman Sadovsky is listed on the Skate Canada site as going to Nebelhorn (not a surprise but now official): https://skatecanada.ca/events/#tab-id-2
Click to expand...

I'm both happy and nervous about this. Shows that Skate Canada has confidence in him, to give him the opportunity to get Canada a 2nd Olympics spot, but it also puts a lot of pressure on him.

Congratulations to Wesley Chiu for winning the Canadian men's first individual JGP event medal -- GOLD! -- since Stephen Gogolev at the 2018 JGP in Bratislava. Wesley's clean 1st place SP was the key, as he scored 76.26 in his program to "Vincent by Govardo (choreo. by Joey Russell): https://www.youtube.com/watch?v=lkCu-sn5bic
He had a 13-point lead going into the FS and fought back in the second half in what was just his 2nd JGP (13th in his 2019 debut at Egna/Neumarkt ITA), setting 3 new ISU personal best scores. I'm glad he'll get another chance to compete (he's scheduled for #4 Krasnoyarsk) and land that 4T in the FS! ETA - link to watch Wesley's winner's interview with Ted B.: https://www.youtube.com/watch?v=qJAzJQDeaLE

Had a blast at high performance camp this year

always good to get some feedback from judges and technical specialists going into the season. Next stop, Oberstdorf

I didn't see the link to his most recent vlog (Aug. 1) posted in this thread: https://www.youtube.com/watch?v=YJbxj0328zE

ETA: He said he "competed 4 days ago" (SP only at Skate Ontario's July Performance Opportunity)... how the video ends is hilarious!

Roman's ISU bio has been updated with his new SP music:


Nice, but maybe a little similar to his FP music?

Richmond News article (Sept. 2) with quotes from Wesley Chiu and his coach: 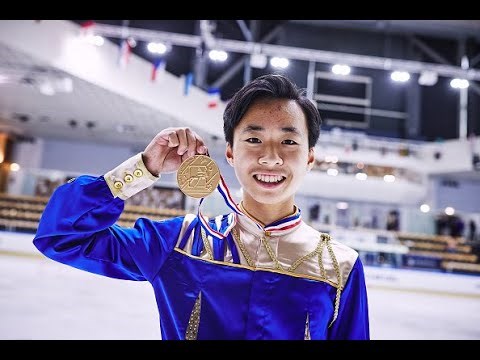 Connaught's Wesley Chiu overcame some early errors to win the Junior Grand Prix in France, the first B.C. athlete to do so for 15 years

And standing on the podium, as the national anthem played, his proud coach, Keegan Murphy, said he recalled all the sacrifices Wesley and the Connaught Skating Team had made since the start of the ********* to give the rising star the best chance possible at the highest level.
“Our goal was 200 points and he got 199.9, so, that’s pretty close,” laughed Murphy, adding that 200 would normally be enough to challenge for a gold medal.
“We didn’t pick a result goal, as the result is often out of our hands with the judging.
“I wasn’t sure (if Wesley had won). I knew it was going to be a close first or a close second.
“It was a very special feeling (to see Wesley on the podium), as I’ve been teaching him since he was seven.
“There were a lot of very difficult situations over the last 18 months with *********, so it was very validating to see him on that podium, knowing all the sacrifices and wise decisions we made to keep Wesley healthy and engaged.”
Click to expand...

Wesley, a student in the sports program at Magee secondary in Vancouver, said it “was a great feeling to be up there for the country” on the podium.
He said his parents watched the event live on YouTube from the edge of their seats at home in Richmond.
“They were very excited, I don’t think they saw this coming,” added Wesley, who is now setting his sights on the next Junior Grand Prix international in Russia in 10 days and, further ahead, the national seniors next year.
Click to expand...

danafan said:
Nguyen, Phan, and Orzel are assigned to Autumn Classic. So possible skate off between Orzel and Phan for the final Skate Canada spot.
Click to expand...

Joseph Phan is no longer listed

for Autumn Classic as of today (Sept. 8) and it's now a Canadian-only event with the additions of Samuel Angers, Beres Clements & Bennet Toman: https://results.isu.org/events/cscan2021_Men.htm

I saw that Toman shared on his instagram story that he was added to the Autumn Classic but didn't realize it was a Canadian only event.

If Phan is not listed for Autumn Classic - I hope he's okay and I wonder if Orzel will get the Skate Canada Internatonal spot. He'd seem to be the front runner.
R

I think nobody is the front runner for SC. Sigh. I wonder if we'll give the spot away.....

I want Conrad to do well so badly, but what he's doing just isn't working. International panels scoring him in 5s and 6s still and his nerves are compromising the jumps. He's not packaged well and he still just doesn't look comfortable out there.
I hope some day this gets sorted. He has some fantastic tools.

Does anyone know why Nam w/d? I don't currently have access to the K&C forums, so I'm not sure if it was already discussed there.

I can't get the quote function to work....
Anyway @Rock2 Orzel has already been added to the SCI roster (on the ISU site and on Skate Canada's international assignments page - even prior to this week-end).

Orzel skated a fairly clean program at skate Ontario last video event with 2 3A and 3 quads. He is landing quad flip and lutz in practice. Remember this weekend was the first time he competed in front of judges since Jan 2020

Don’t write the kid off yet!
R

I guess they didn't have anyone else to send to SCI. I hope he skates well- the experience can only help him.

Write him off? No, not yet, but while we can say "these skaters haven't competed in a big event in 2 years" I might say "we should see some noticeable improvements (e.g. Kaiya) over these last two years".

It's not about skating perfect programs - it's bigger picture than that. Doing what he did in the short and barrrrrrely cracking 80 is a sign of deeper issues than not competing in 2 years.
You must log in or register to reply here.