Note on the margin, own quotation: "Now only Lea Johanna Dastich's leaving is missing to complete the misfortune of coach Anett Poetzsch."
Zagreb was canceled, sure. And it looks like Lea will become a permanent invalid; as she suggests, only consolation remains to be donated, to wish her that she overcomes the sea of her tears and the wall of death silence |

cs.berlin said:
and it looks like Lea will become a permanent invalid; as she suggests,
Click to expand...

Could you provide a link?

cs.berlin said:
the sea of her tears and the wall of death silence |
Click to expand...

I feel the same. In her latest instagram post about her injuries Lea Johanna Dastich mentioned that there were tears, but I could not understand what cs_berlin refers to at the end of her post.

Lea Johanna Dastich on Instagram: “"It's not what you achieve, but what you overcome. That's what defines you." One year ago I announced that I wouldn't compete the 2018/19…”

320 Likes, 8 Comments - Lea Johanna Dastich (@lea_dastich) on Instagram: “"It's not what you achieve, but what you overcome. That's what defines you." One year ago I…”

Lea Johanna Dastich on Instagram: “✨Eliteschülerin des Sports 2019✨ so happy to be honoured for both my academic and sporting successes. I am extremely grateful for the…”

322 Likes, 10 Comments - Lea Johanna Dastich (@lea_dastich) on Instagram: “✨Eliteschülerin des Sports 2019✨ so happy to be honoured for both my academic and sporting…”

Suleymanova sits in 5th with 45,92pts (no protocols up yet); Marold did no show up.

Berliner Morgenpost has an article about Hocke/Kunkel: "Berlinerin Hocke as surprise guest at Grand Prix Final" – The Berliner figure skater Annika Hocke participates with Robert Kunkel as the first German pair ever at the Junior Grand Prix Final.

_When the two met in the summer to plan the new season, the conversation at some point also came to the Junior Grand Prix Final. At that time, it was more of a dream than a concrete goal, as no German figure skating couple had managed to qualify for the competition by then. ... "We are the surprise guests at this party," says Annika Hocke. "But we don't want to be intimidated and want to show our best performance at the finals."

_For Hocke in particular, the decision to compete again in the juniors this winter seemed at first like a step backwards. (as an Olympian ...) "But the results show that in reality it was a big step forward," says her coach Alexander König. ...

_A return to singles was not an option, but a new partner was also not in sight. Hocke soon started to skate with Kunkel ... "We were two pair skaters without a partner and simply thought that we could do the exercises together in order to stay fit," says Kunkel. They realized this could be more. ...

_H/K wanted the partnership – against the initial concerns of the coaches. "Some elements really didn't look that great at first. The decisive factor for us, however, was, that we clicked immediately. It doesn't happen too often," says Hocke.

_Hocke is much more experienced internationally, Kunkel's best result was 7th place at Junior Worlds. Nevertheless, according to coach Alexander König, both athletes are acting at eye level. "It is mutual learning. Both benefit from this partnership," he says....

_They aiming for Euros, and Worlds. ... "In regard to the 2022 Olympics, the World Championships would be an important experience," says Hocke. It sounds as if at least this goal is now firmly on their agenda.

text_skate said:
_They aiming for Euros, and Worlds. ... "In regard to the 2022 Olympics, the World Championships would be an important experience," says Hocke. It sounds as if at least this goal is now firmly on their agenda.

Take it easy and, perhaps, to quote completely what is not completely unimportant (if the Berliner _Käseblatt already takes the trouble): "But the starting places will only be finally awarded at the German championships in Oberstdorf at the beginning of January".

We know that there are only two starting places available (fought for by Hase/Seegert and Hocke/Blommaert): Blommaert has already said who is eligible for the second place: he (with Pavlova) definitely also wants to take his chance (one can only hope that the decision can be made this time clearly and unambiguously).

cs.berlin said:
Take it easy and, perhaps, to quote completely what is not completely unimportant (if the Berliner _Käseblatt already takes the trouble)
Click to expand...

This is a known fact to all interested in German figure sakting, or at least those, who read this thread. Therefore I skipped translating it, but indicating by (...), there is more. Feel free, to translate the rest.

Worlds spot will be decided btw not at German nationals, but at Euros.

text_skate said:
Worlds spot will be decided btw not at German nationals, but at Euros.
Click to expand...

But that would also be a known fact for those who are interested.

cs.berlin said:
But that would also be a known fact for those who are interested.
Click to expand...

Well, there is much that is not in this article, and what can or cannot be assumed to be knowledge is not the subject either.
In any case, if two beer glasses are collided prematurely with each other, one can probably express skepticism ...

From Russia with Love - German Edition

Can we keep this thread going as in the recent years please?

I've heard this crap before ...
Some people seem to have to act as moderators, those lights of all people, who maintain their little ropeshafts here.

Can we keep this thread going as in the recent years please?

Annika Hocke on Instagram: “Lets lift our way to Torino or at least to the airport ✈️ Can’t wait to be back in Bella Italia🇮🇹”

648 Likes, 16 Comments - Annika Hocke (@anni_kamaria) on Instagram: “Lets lift our way to Torino or at least to the airport ✈️ Can’t wait to be back in Bella Italia🇮🇹”

Zagreb updates:
Good outing in their first event together.
Lopusova/Kazimov got a total of 119,05pts in total an met FD TES too and now have the set.
The score is behind the two 'top' teams for now, but it seems like a decent start! Hope this works out! As mentioned before, I really like Kazimov's skating.

Good news. Schott sits in 3rd after the SP (61,78pts) < call on the loop. Let's hope she can keep the spot and gains her 2nd CS medal this season.

Isaev came in 19th with 46,11pts. She fell on her 3f<. But, to be fair, Isaev's PCS have not been that bad at all during the season. She had solid outings. Good for her getting the chance on a bigger stage, it's not like she would take the spot away from others right now.

As expected, Hocke/Kunkel behind the russians in 6th place (59,47pts).
I really like this SP for them. I am willing to give them time; I like what I see so far and I have no doubts Kunkel will grow with the task.

Side note: Nice to see Rico Rex back in Torino as a coach now. 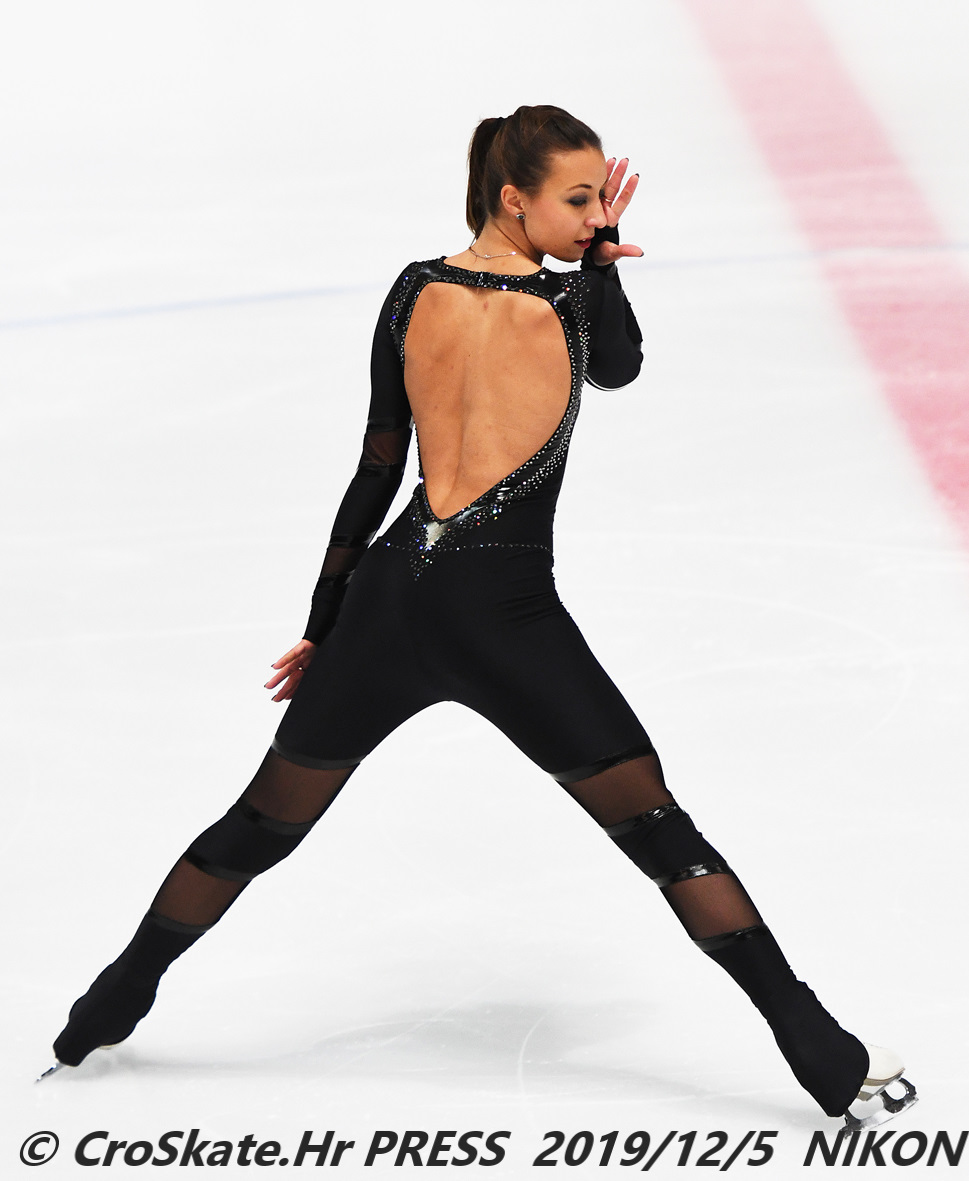 “Nicole SCHOTT of Germany skated an amazing short program in Dom sportova arena at #goldenspin #skatecroatia and is in 3rd place with 61.78 total points”

Hase/Seegert 2nd with 68,30pts; Pavlova/Blommaert 5th with 59,40pts. Almost same points as H/K at JGPF.
I am damn curious (if P/B are eligible) how german fed will decide on this matter

Everything is beautiful at the ballet!

Can Nicole Schott do the same in Sr Ladies (current 3rd)? Ditto the two German Pairs currently in top 5?

3rd place for Nicole in the overall standings and on the podium at the Golden Spin.
In the SP and the FS B-grade closer to Eliza resp. to place 1 than all other skaters, plus clean (nice 3F+3T; no deductions/falls) and demanding skating - that's it what a real audience wants. M. Huth seems to be on the right track with her, who knows where this will lead (inkl. 3A?)
Of course not to forget are still 40 points distance to the Russian diva (with 2x 3A) .....

The medalists of Ladies event at goldenspin 2019:

All I am saying!

No comment on the men and the dance drama towards nationals is building between M/D and U/S; K/N seem already out.

Well done Schott, as mentioned by others before; right track this season; still, without 3lz the layout is so limited, but I still have hope it might appear someday.
But back with 3f3t after 2,3yrs, finally!
Go for it girl!

Everything is beautiful at the ballet!

Minerva and Nolan were not able (fall at 3S, -1pts overall) to improve on GP Moscow, but already achieved their second success this season - trend confirmed, there is still more in the tank, the basis would be a less boring program (of course it's hard to decide, because there was/is nothing to see this time)
Last edited: Dec 6, 2019

Some really nice German results in Zagreb. There neither is a stream nor an acceptable ISU result page with live results. We are in 2019 guys