Screen capture from Jordan's On Ice Perspectives instastory with the caption "One Last Project before I leave Toronto". It's the Cricket Club and pictured are Jason, Conrad, Joseph and a few other skaters.

It’s always a treat to get to watch Jason skate. His mastery of the blade, speed, and presence on the ice are just incredible to witness in person.
Click to expand...

Thanks for the links, Sylvia.

Danielle Earl @DanielleEPhoto Dec 7
A few weeks ago @IcePerspectives and I had the opportunity to visit a few of the incredible skaters at @TCSCC_Athletics for a session of filming and photos before Toronto moved into the grey zone. Stay tuned for more photos!

According to her tweet, the photos were taken at the same time Jordan filmed the performances. Hopefully Jason's video will be posted soon!

@jasonbskates we just love this photo series AND cannot wait to make your world famous banana oatmeal pancakes with you... this Sunday, December 20th at 10A a la Zoom!

Want to impress your friends and family with a new (and healthy) brunch recipe?! Join us this Sunday, 12/20 by skating over to the link in our bio!
Click to expand...

oniceperspectives
Imagine a #figureskating video game that looked like this! Who would you want to play as? @jasonbskates

I’d love to see some animators use their creativity to make this look like an actual video game! Maybe you add a stamina bar? A balance meter? In-world rings to skate through that charge your jump ability if you nail them just right? An audience applause indicator that recharges your stamina?! (disabled for the ‘2020-21 Season’ survival chapter of course)! Your only limit is your imagination!

(I would watch multiple repeats of Jason doing stroking exercises around a rink . He's so fast and so smooth!)
Last edited: Dec 20, 2020

ON HIS OWN IN TORONTO, JASON BROWN WORKS TOWARD VEGAS RETURN by Lynn Rutherford (Dec. 22, 2020): https://www.teamusa.org/News/2020/D...Toronto-Jason-Brown-Works-Toward-Vegas-Return
Excerpts:

After the 2020 world championships were cancelled, Brown worked with longtime collaborator Rohene Ward in Chicago to create a competitive short program for this season. They ended up with two: a lyrical routine set to a gentle piano piece, “Melancholy,” that Brown used to win the Peggy Fleming Trophy in Colorado this summer; and a forceful, emotional program to Nina Simone’s rendition of the spiritual “Sinnerman.”
“I just fell in love with ‘Melancholy;’ it was almost like the mood I was in, with the quarantine and the emotion of it all,” Brown said. “One day, Rohene called me and asked, ‘Have you done both programs?’ Well, I hadn’t (been training) ‘Sinnerman.’ And Rohene was like, ‘Jason, you have to do it.”
So one day in late summer, Brown took the ice to Nina Simone. The music was so powerful, the performance so promising, it stopped Orser and Wilson in their tracks.
Click to expand...

“I love Nina Simone, and I’m always trying to find some way to bring my own (background) into skating,” Ward, one of skating’s few prominent Black choreographers, said. “I have been fortunate enough to have a muse like Jason, who is willing and open to trying all kinds of stuff. He does a really good job breaking barriers and bringing a lot of people together. What Nina embodies in her music, Jason embodies in his skating. I thought it was a perfect match.”
Click to expand...

Danielle Earl has posted more photos of the OIP video session with Jason at TCC:

Photo 4 is making me look forward to seeing the video more than ever!

Bookseller said:
We all wonder...It's a difficult situation no matter where you train and who you train with at this point. You do the best you can. I'm more concerned with his social situation in Toronto than his training. I'm am quite sure that Jason's training is fine. But his friends are gone and there's no one his age at the rink. We'll see what happens.
Click to expand...

Jason has a maturity and motivation as an elite athlete and has blossomed where he is especially with Traci as his main coach. I see no problems. We all go through loss of friends for various reasons and the mature adapt, as I'm confident Jason has done.

DreamSkates said:
Jason has a maturity and motivation as an elite athlete and has blossomed where he is especially with Traci as his main coach. I see no problems. We all go through loss of friends for various reasons and the mature adapt, as I'm confident Jason has done.
Click to expand...

Agreed, he is more resilient than you think. His optimism challenged by “life on repeat,” Jason Brown learns to take each day as it comes - OlympicTalk | NBC Sports

Jason Brown’s usually boundless optimism finally hit its limits about a month ago. His intrinsic motivation to keep improving and his consummate love for figure skating had already been challenged several times

The more Wilson and Orser work with him, the more impressed they are, especially by the little things that make Brown’s skating so remarkable.
“There have been moments in his training so brilliant that Brian looks at me with tears in his eyes,” Wilson said. “There was one moment, watching Jason do his choreography, that Brian said, ‘I’ve never seen anything better than that.’”
That such moments are frequent is the most impressive part.
“It (what Wilson referred to) was just one of those `jaw dropping’ moments where you realize how great he is,” Orser said. “He keeps reinventing himself – new movements, transitions, entries to elements.
“I found myself saying, `Wow!’ over and over. Not just one day, but most days. The only other person who has made me react this way is Yuzu (two-time Olympic champion Yuzuru Hanyu of Japan, whom Orser also coaches.) Jason is a skater’s skater.”
Click to expand... 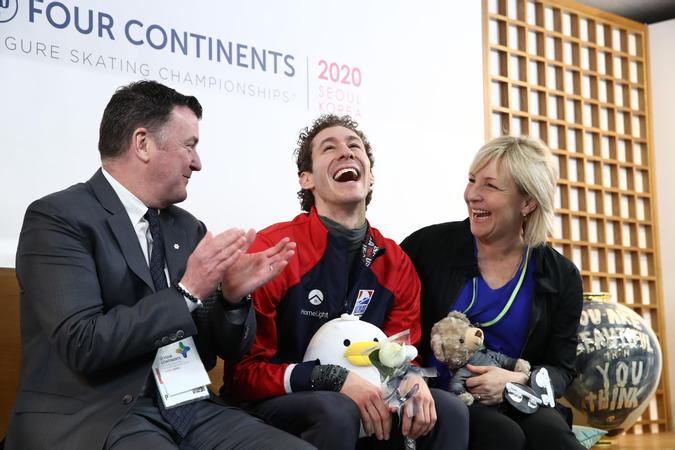 There is an unwavering optimism in Jason Brown's voice.

Few things are the same anymore in the wake of *********-19 *********, and ice skating had to adapt this season as well. Brown wakes up at 7:30 a.m. for virtual pilates class, and FaceTime sessions his other workout instructors. He competes virtually. Only 10 people are allowed in the ice rink at once — 3 coaches, 7 skaters — so his time on ice is limited. But when he is there, it feels like home.
"All things are different, but ice is ice," Brown said. "There's this exhilarating feeling of 'How is this going to unfold? I can't wait to see what I create today.'"
While he's skating, he said he feels calm, in the way that a painter might feel painting a canvas. While performing, there's a sense of freedom and gratefulness for the opportunity to skate in front of an audience.
Click to expand...

Thanks to Jordan (On Ice Perspectives) a preview to the beginning of:

That short program was totally worth the wait!

Mr. Brown's short program is the most exquisite,arousing, and splendid piece of art I have seen on the ice in at least twenty years. He is first place on my scorecard.

I'm so glad to watch this live! What a great performance! His skating is unmatched. Love it!

That was sheer perfection from Jason!

Surprise, Surprise! He skates last in the FS!

A chart showing how everyone ranked (skaters with invalidated elements were not included):
https://pbs.twimg.com/media/Er5F4-GWMAwBgxy?format=jpg&name=small

Brown: This entire SP is inspired by Alvin Ailey's Sinnerman performance. It's where Rohene got the idea to do it. He wanted to do it on the ice - particular about all the shapes, angles, lines. It's the kind of artistic development that he wanted me to master #ToyotaUSChamps21
Click to expand...

The Alvin Ailey choreographed performance piece Revelations includes Sinnerman. The Sinnerman part starts at 19:40 but the whole piece is worth watching. I can really see the homage to Ailey in Jason's choreography. Jason Brown: “I kill it in a different way” - OlympicTalk | NBC Sports

Anyone who watched Jason Brown’s “Sinnerman” short program knows how mesmerizing figure skating can be when a gifted skater teams up with a talented choreographer who selects just the right material.

I have not read the recent posts in this thread, but I want to say Jason’s SP was simply amazing. Not one dull moment, and perfect execution.
Last edited: Sunday at 7:22 PM

I'd rather have a pug for my president

I haven't been posting much in recent times (years really), but popping in to say Jason's sp was exquisite and I'm rooting for another performance like it in the lp.

I know there have been a few events where Jason hasn't skated last in either the sp or lp or both, but not many!

At least he's used to it by now.

Give Rohene all the chocolate skates he wants after choreographing Jason's masterpiece SP. LOL

Tai Babilonia tweet:
If skating royalty #JohnCurry & #TollerCranston were alive today I know they would totally groove on the incredibly talented @jasonbskates (he points his toes).
P

That Sinnerman SP was one of the greatest things I've seen on ice. Pure art. His performance needs to be shown to future generations as a lesson in skating. I felt like I was watching contemporary American dance on ice.

Wonderful two skates from Jason in Vegas! I sincerely hope that he can make next year’s Olympics team, after not made it in 2018. Would love to see Sinnerman and Slaughter on Olympic ice...should keep and refine these two programs. That long Bauer spiral during the transition to the slow romantic tune in Slaughter is to die for. I’ve already replayed it 10 times!
V

Frau Muller said:
Wonderful two skates from Jason in Vegas! I sincerely hope that he can make next year’s Olympics team, after not made it in 2018. Would love to see Sinnerman and Slaughter on Olympic ice...should keep and refine these two programs. That long Bauer spiral during the transition to the slow romantic tune in Slaughter is to die for. I’ve already replayed it 10 times!
Click to expand...

I'd say it's pretty likely he'll keep those programs for next year, especially if there is no Worlds this year. It wouldn't make sense to scrap them after only performing them once in competition, given the fact that they were so well received from a judging standpoint. If he can start landing that quad consistently, and remain injury-free, IMO he's a shoe-in for the Olympic team. In fact, given his performances this weekend, he may make the team even without a quad -- and I wouldn't say that about anyone else. He really is uniquely gifted.

Great to see Jason skate so well. Loved his SP. I didn't get into the long but can appreciate his top of the line skating skills and moves and body lines and shapes and movements....!!!
You must log in or register to reply here.