EV: After the Olympics where your pupil failed the SP losing any chnace for a medal you said landing a 4lz and a 4f in the SP is a suicide for a singles skater. In the recent USA nationals Nathan performed these jumps, more than that the combo with the 4F was put in the 2nd part of the programme, thanks to which his marks were phenomenal - 113.92

RA: It was one of our goals this competition. Combining the lutz with the flip is indeed tough, but we began the preparations before the Olympics. Hence why Nathan decided to put that combination in Korea. From my coaching point of view that was, of course, a mistake.
On one hand I understand what the ambitious skaters like Chen, Pluschenko or Trusova like - they will always try to push the boundaries and do something the rest of the world considers impossible.
On the other hand the Olympics are not the place for such experiments. Now I can tell Nathan and I needed the whole 3 years to comfortably integrate these jumps into the programme. Though, of course, that's not the limit of my coaching dreams.

EV: What is?
RA: I will not answer, sorry. Don't want to talk about it before the time is right.

EV: Are you that superstitious?
RA: Am certainly superstitious. Any numbers that I see on my watch or the hotel numbers became a sign and many times I witnessed there is a connection between the numbers and things that happened after.
As for our work together, we have a certain strategy and tactics which I don't like talking about. Sometimes even Nathan doesn't know why do I try certain things in the practices and what do I prepare him for.

EV: I.e. you are preparing him for something even more extraordinary?
RA: First of all I prepare him to something that will allow increasing the gap. It's rather easy in the sports. You want to be the first? Go forward!

EV: What wasn't done yet in the men skating that seems the most possible?
RA: There are options, if you start thinking that direction. For example moving both lutz and flip to the second part of the programme and put at the beginning...
EV: A 4A?
RA: No, to move there the easier quad jumps. The axel, like the 3loop or a 4T is a different level of complexity. It sounds weird but all the jumps I named are possible to land, but it's very injury prone.

EV: Is it possible to prepare the athlete's body in a way the odds to be injuried would be minimal?
RA: It's not an easy task. For example in gymnastics at the time they had a huge breakthrough thanks to the paralon pulls which allowed learning very hard elements without getting injured. There is nothing of the kind in figure skating yet.
The thing is not about you not being able to try a complicated jump, but you might fall and fall badly. The blade is very thin and it's on a slippery surface, if you underotate 1/4 of a rotation and your leg twists your ankle or knee would be injured. I.e. one wrong move and the athlete is out of the process for 2 months.

EV: At the beginning of this season you said `Chen being the best is a myth'. Do you still think so?
RA: I don't even think about it, frankly. We are just doing our job. We are trying to create the model of the programme, tring different options. At the end of October in SA as you remember, Nathan skated his LP twice - in the personal and team event and had a different set of jumps.
We now came to a sort of optimal case with 5 quads, and even though not all we planned worked at the Nationals it's obvious beating Chen will be hard. He is not in the best shape yet though. Speaking of Las Vegas skate am satisfied with his SP but can't say the same about the LP.

EV: Do you keep in mind the possibility the Worlds will be cancelled?
RA: No matter what will the ISU decide our practices are set to be in the top shape by the end of March.

EV: What if they do cancel the competition?
RA: It will not change our working plan. Of course I'd rather they cancelled as late as possible. It's hard for an athlete to keep practicing full time knowing he will be lacking the main competition. It's hard practicing now as it is. But am absolutely satisfied with Nathan's working ethics. He is not going anywhere, he is in California full time, he does not miss a practice and he does all I tell.

EV: Was the work interrupted by the fires in October when Chen had to be evacuated?
RA: The fires are our normal. It's a rare thing where my family lives because the ocean causes a high humidity, but if you drive toward the rink where Chen lives or further - that burns quite often. The system of the evacuation is a well developed preventive measure in case the fire will go through the highway to the living spaces. Hence Nathan had to participate one of these evacuations. What could he do? It's the way it is. However, it's +20 now and even the beaches are still open

EV: But you do have to wear the mask?
RA: On the rink and indoors. It's very strict.

EV: Will you be looking for an opportunity to compete at the end of March should the Worlds be cancelled?
RA: Of course. Starting the autumn we organize competitions on our rink so the athletes would have a chance to skate their programmes in the conditions as close to the real competition as possible. Of course it's a very different level of adrenaline. Even in Las Vegas with the carton figures it was not the same. But it is what it is. We have to use all the opportunities we get.

Wow that’s such a low key interview by his standards. lol.

Thank you for posting this interview! I really like Raf's no nonsense style. He and Nathan have a plan and they execute!

No questions or comments about Mariah Bell..... It would be interesting to hear Rafael's comments on what she needs now to move forward.

Is that the reporter that hates EG the savior of Russian figure skating?

I was also disappointed no questions about Mariah.

This Raf is a pretty interesting guy.

I hope they stay safe in their part of California there's a lot to deal with with potential fires and Coronavirus.

"While three-time world champion Nathan Chen scored the maximum points for the US team at the World Team Championship in Osaka, his coach Rafael Arutyunyan went to enjoy his vacation. While in Moscow, the well-known specialist gave an interview to RIA Novosti correspondent Boris Khodorovsky." (thanks @marysy for originally posting the link in the From Russia with love thread): 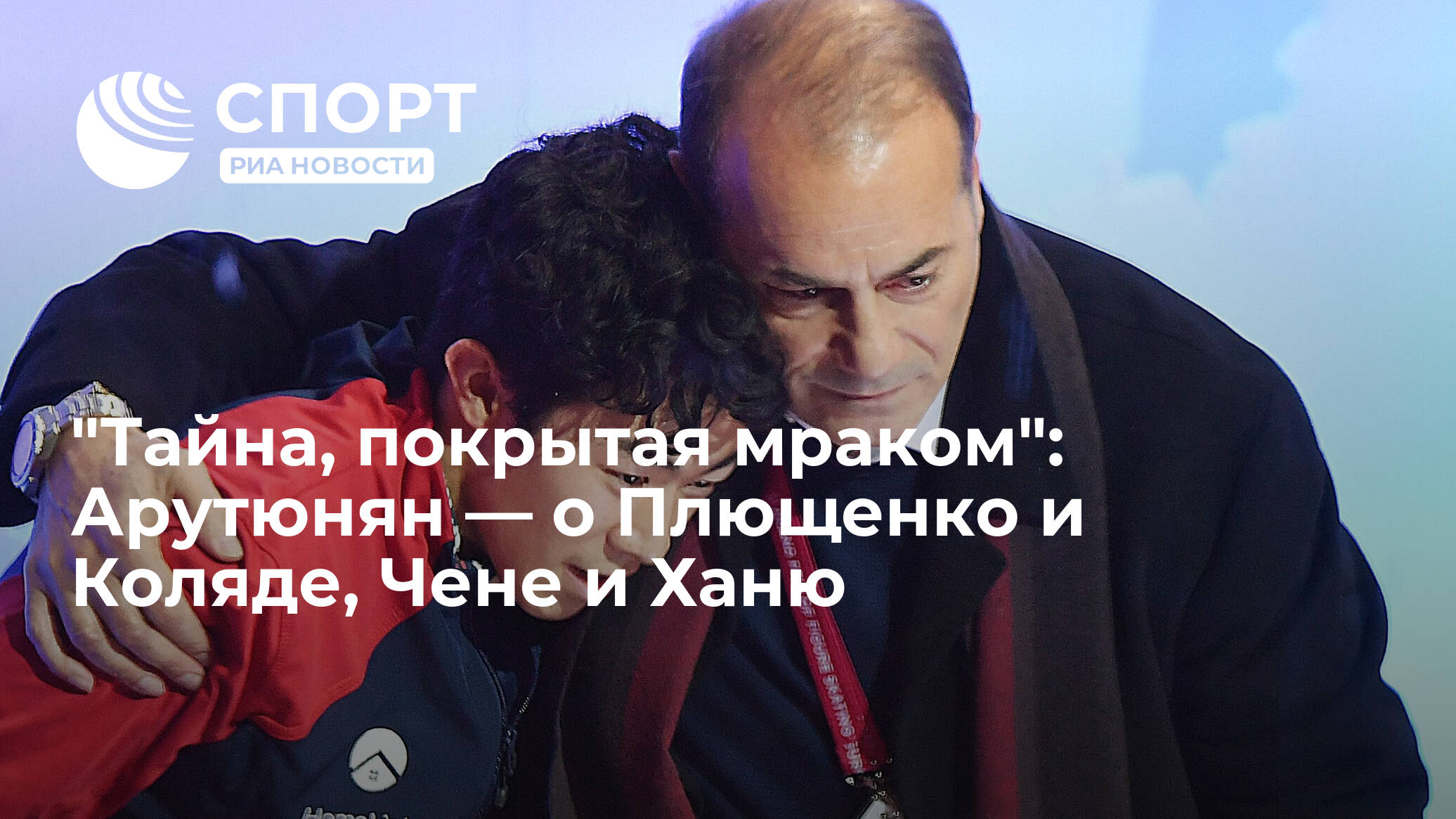 How did you let your most stellar student go to the World Team Championship without a coach?
Since childhood, I taught Nathan to go to competitions, which, let's say, are not the main ones in the season, on their own. Now he may well do without my presence behind the side at the World Team Championship. We passed the main start of the season in Stockholm together. There my presence was necessary.

I don't know how ethical it is to ask about this, but how do you still explain Yuzuru Hanyu's so uncertain performance in the free program at the World Championships?
It is difficult to give any comments without knowing where and how Hanyu prepared for the main start of the season. This is a mystery shrouded in darkness. With Chen, everything was very clear: for the last two years Nathan studied on the other side of America, we had to train him remotely. But in April last year, he flew to California and did a great job, which even the coronavirus could not prevent. In Stockholm, everyone saw the fruits.

You know quite well the capabilities of Mikhail Kolyada, who, together with Stanislava Konstantinova and coach Valentina Chebotareva, trained with you in America. How would you rate his first season under the direction of Alexei Mishin?
The fact that he has become more stable is a fact. I became calmer and more balanced, and this is also a big plus. Whether it was necessary to go to Mishin earlier or, conversely, later, is not for you and me to judge. And not the fans. Each skater has his own destiny.

A few years ago, Kolyada often took risks, including raw quadruple lutz and quadruple salchow in his programs. Now I have limited the content to a quadruple sheepskin coat [4T] ...
It's not for nothing that Mishin is called the Professor. He always clearly builds a strategy for preparing a student. If Kolyada stably performs two more quadruple jumps, he will be able to claim prizes at the world championships and the Olympics. Surely Mishin knows what he is doing.

Could you dot the i's in the upcoming cooperation with Alexandra Trusova?
In the two decades that I have been working in the United States, I have only entered a Russian ice rink once. And even then - he asked himself when Chen, after the Grand Prix stage in Moscow, had to fly to France. Then I asked Elena Buyanova to shelter us at CSKA for two days. And that's it! At the same time, he received American citizenship only a year ago, and for 19 years he worked in California with a Russian passport. Believe me, there was a resentment in my heart that no one needed coach Rafael Harutyunyan.
The first person who invited me was Evgeni Plushenko. You can say that my dream has come true - to see how Russian figure skaters train, to breathe the air of Russian figure skating. Trusova had nothing to do with it. It's just that Eugene invited me to his home, and his house is next to the ice rink.

What help does her coach expect from you in working with Trusova?
So far, we have not discussed any specifics. It is important to note something else: Plushenko is not only a coach who does not depend on any external factors, but also a businessman. And I'm not dependent on anyone either. We may well find common ground. Perhaps I will come to the base of the Plushenko Academy with my athlete or athletes, perhaps his students will come to me. It is quite possible to agree on cooperation that will be mutually beneficial.
Last edited: Apr 19, 2021
You must log in or register to reply here.