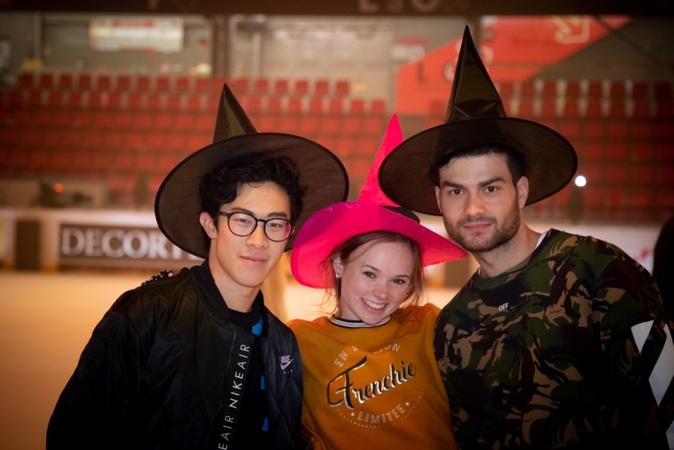 After failing to make the 2014 Olympic Team and having ankle surgery, French figure skater Romain Ponsart flew to Colorado in the fall of 2015 at the behest of a French coach who urged him to see if a new training environment would help him return to his previous level. Ponsart was set on...

Chen and Ponsart met through a mutual friend and they started hanging out off the ice. Before long, Chen moved into an apartment that was a two-minute walk from Ponsart and Bell's and spent most of his time at their apartment.
"Romain is one of the nicest guys ever, and he really made me feel at home," Chen said. "He's someone I can trust with everything, who I know is always there if I need him – to the extent I'm almost calling him family."
"I respect him a lot because he's so humble and also he has so much respect for everybody," Ponsart said of Chen. "He's someone who can have fun but when something is serious, he's going to help you, he's going to do it."
After communicating largely through Google Translate at the start of their relationship, Bell helped Ponsart learn English. He is now fluent; meanwhile, Bell admitted that her French still needs a lot of work.
"Actually, I had to improve my English a lot because of Nathan," Ponsart said. "He's speaking so fast and I don't know how to explain it in English but a little bit with a low voice and cutting some words. I remember when I met Nathan, I was saying to Mariah, 'I don't know what he is saying!'"
Click to expand...

The trio has not been together in a year. Ponsart went to France late in 2019 to renew his visa. He last saw Chen in Italy for the Grand Prix of Figure Skating Final and Bell in Switzerland with her family in December. Then the COVID-19 pandemic hit, which meant his appointment at the embassy continues to get pushed back and so does his timeline for leaving France.

Ponsart currently lives and trains in a remote town [Vaujany] where he is only allowed to leave his apartment to skate. In the meantime, the trio does group video chats nearly every day.
Click to expand...

That's adorable. It reminds me of Singin' in the Rain with the two guys and the girl who do everything together.

Nathan recently shared a throwback photo of the three of them (taken at 2019 Nationals in Detroit, I think): https://www.instagram.com/p/CHbOn7XnqqG/

ETA: Yes, it was during 2019 Nationals - Roman shared the black-and-white version of the same photo originally on his IG: https://www.instagram.com/p/BtKtf20hZwm/

They’re too cute. I’m feeling lazy. Can someone remind me how old these skaters are?

feraina said:
They’re too cute. I’m feeling lazy. Can someone remind me how old these skaters are?
Click to expand...

Hmm. Is Romain that much younger than Adam or Ashley? I’m a little surprised that Nathan said he couldn’t be very close to the latter two because of the age difference but got along instantly with Romain.

This may be an unpopular opinion amongst the millennials,but I do not find these pseudo-polyamorous relationships amusing and firmly believe this is something we shall not openly celebrate. It's unnatural.

feraina said:
Hmm. Is Romain that much younger than Adam or Ashley? I’m a little surprised that Nathan said he couldn’t be very close to the latter two because of the age difference but got along instantly with Romain.
Click to expand...

Not really. Adam is 31 and Ashley is 29. Maybe Romain is at the cut-off age for generational understanding. Or perhaps Nathan and Romain have a bromance that surpasses time and space.

My suspicion is that Adam and Wagner were the top dogs in the rink and perhaps "in charge" too. Remember Adam helped organize Raf's schedule? Wagner probably had a life outsdie the rink too. So perhaps they acted more like elder siblings, more so than Romain.

I have to say that I am disappointed that this wasn't an article about them coming out as a polyamorous couple.

From this article, it sounds like Mariah and Romain haven't been able to see each other in almost a year...which is a really long time to be separated from your partner. I just want to say, that cannot be easy and I really hope situations change enough that they can be together soon.

blue_idealist said:
What I'm a bit disturbed by is Bell and Ponsart starting a relationship when they couldn't really communicate with each other (besides physically

Aren't those the best types of relationships - especially at the start.

skatingguy said:
Aren't those the best types of relationships - especially at the start.

I remember a time,not long ago, when openly boasting about sinful and lustful urges was unacceptable and frowned upon.

-BB
You must log in or register to reply here.