@Gris posted this interview in the current From Russia With Love thread but I think this unfortunate news deserves its own thread - THE ******** RUINED HER CAREER, BUT NOT HER CHARACTER. ANASTASIA SHPILEVAYA'S SINCERE MONOLOGUE AND HER NEW LIFE IN FIGURE SKATING by Anastasia Panina: 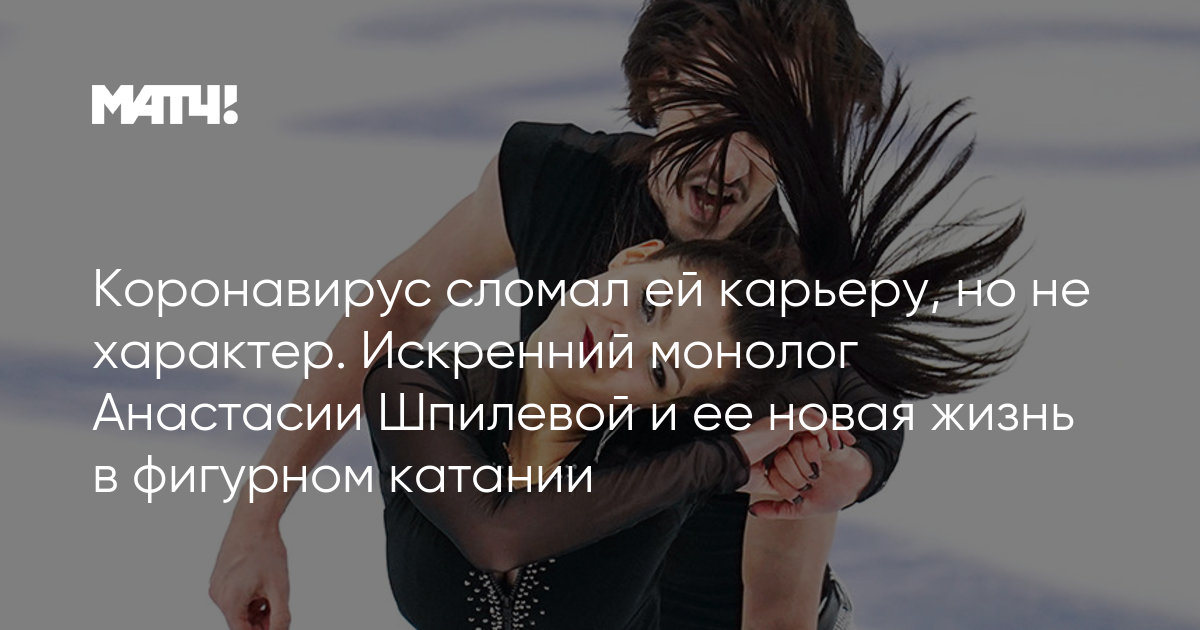 C0RONAVIRUS: TOXICITY, ARTHRITIS AND TWO FRACTURES
When the quarantine ended, we went out on the ice for a week, and then I fell seriously ill. ********. First she was treated at home. I called the doctors, I knew what could be taken, but nothing helped - my temperature was kept for a total of two months.

There was no improvement despite two courses of antibiotics. My kidneys started to hurt, and other problems began. Insane shortness of breath - I got up from bed to toilet and began to choke. I tried to walk, do breathing exercises, but nothing helped.

We decided to go to the hospital in the center of Gamaleya - this is our sports. I spent ten days there, all this time they cleaned my blood, because it was very bad. Complications went to the whole body. There was a strong intoxication. It got better, I was discharged, but at home the temperature continued to rise for some time. And since I was quarantined again after I was discharged from the hospital, the total break without training turned out to be huge.

Then I went out on the ice, I'm not exaggerating, for one hour. The next morning, my foot hurt so badly that I simply could not stand on it. I did not understand what was happening - there was no reason for such pain. Immediately, naturally, to hospitals, for examinations, and there they tell me - you have reactive arthritis. Complication after ********. This happens, sit at home for another three weeks. I informed my partner and coaches about this, and I sat at home - what to do.

I see myself as a singles coach rather than a dance coach. All this time I have been working with singles and I realized how comfortable I am. I can teach them to skate beautifully and at the same time jump, because the base for single and double I have is very good. For triple, quadruple and quintuples, God forbid, I would later like to invite a second coach specializing in jumping. But this is a very distant prospect.
Click to expand...

I've already said thanks to the coaches and my partner. I also want to thank the audience. Even when I had not yet announced that I was finishing, many wrote to me, asking how I was. I am grateful to everyone, although I rarely answered, simply because then I was not able to. You have no idea how important it is for athletes to be supported by the fans for whom we skate.
It is important that people are kinder to each other. No one knows what is in the soul of another person at the moment, and a careless, harsh word can severely hurt him, even fatally wound him. Now I'm not only about figure skating, but about life in general.
Click to expand...

This is such unfortunate and sad news. She has had a really rough time.
Wishing her the best in her future endeavors.

(((Shpilevaya)))
All the best for her future!
M

She's only 5'0 and two years older than Kolesnik...

Doesn't he already have a partner? She appears to be resigned and there are many health issues?
You must log in or register to reply here.

Oksana Baiul: "Tutberidze is trying to build her show “Champions on Ice” where she will be the main star, and not her athletes.”