Your moment of the games?

There are many but I think my husband getting up one morning and finding me in tears:and wondering who had died.

Ooh great post. Mine would have to be Lisa Carrington winning three golds and New Zealand winning 2 golds and a silver in rowing within one hour.

My non New Zealand highlights would have to be Ledecky powering home to take silver in the 4x 200m freestyle relay and her sportsmanship with her silvers in the 200m and 400m freestyle.

Christine Sinclair and all the fabulous women of the Canadian soccer team. Red, white, and freakin‘ GOLD. ❤

The camaraderie here at FSU as we all snarked about the 7-player play off for the bronze medal in men's golf. Everyone here sharing their knowledge of different sports and joy in having these Olympics at last.

The pure joy of so many athletes at winning Olympic medals. The Tunisian swimmer, the men's marathon silver medalist, the Italian and Bulgarian rhythmic gymnasts, Team USA men's basketball, and on and on and on.

Athing Mu winning the 800m and anchoring that 4x400m relay. She's such a star.

Guan Chenchen's qualifying-round balance beam routine was something to behold.

The women's relay in which all three medal-winning teams outswam the world record was pretty amazing.

Both 400 m Hurdles races - will go back rewatch those races for many years to come.

Leaving aside the Israelis, I'm a sucker for surprising results and good sportsmanship, so:

Week 1: Anna Kiesenhofer winning the women's road race. Kiesenhofer hasn't been part of a pro team since 2017 (she didn't like it) and coaches herself. She and two other riders were way ahead for much of the race, and the peloton didn't work too hard to catch them because they were not considered contenders. With about 40K left, she went off on her own. The peloton reeled in the other two riders, but forgot that there had been three women on that break... so she won by more than a minute, and the silver medalist didn't even realize at first that she wasn't the champion! Now Dr. Kiesenhofer can go back to her day job as a mathematician

Week 2: I'm with allezfred, "can we have two golds?" was wonderful

Sometimes there isn't one person who's best, and winning it with your friend who's supported you through tough times means more than being atop the podium by yourself. That's what being a champion is all about.

Generally speaking: the athletes in the women's artistic gymnastics all-around being so supportive of each other, everyone rallying around Simone Biles, her support for the other competitors and beam performance.
Last edited: Aug 8, 2021

Suni Lee winning the women’s all around gold in Artistic gymnastics. It was awesome to see her step to the moment when it arrived and to hear her teammates cheer her on.

And also just in general the supportive vibe from all of the women in artistic gymnastics (and much of the games) this year. It was so great to see athletes cheering each other on and comforting each other and enjoying even the imperfect moments.
M

Gold to both Russian teams in gymnastics and then Biles managing to win a bronze in beam after all her struggles.

The Italian relay team singing the anthem so loudly along with the audience (of other athletes?) was really moving.

Seeing a lot of medalists from smaller countries is always great.

One last highlight - in spite of all the doomsayers who wanted the Olympics cancelled because it was sure to be a super-spreader event - there haven't been that many cases and very few high profile ones when you consider the huge number of athletes and personnel who traveled to Japan in the last month. I'm so glad that Tokyo and Japan were able to host this global event successfully. It might not have been the Olympics they dreamt of and it will probably scare them off a winter bid for Sapporo for at least a decade or two but the Japanese people deserve all the credit and thanks of the world for sticking with it and hosting these Olympics. The world needed this two week sporting extravaganza.

So many, as is always the case at the Olympics. But the first one that came to mind was Simone Biles hitting her beam event finals routine after the nightmare week she had and the endless abuse she suffered from people who can't even do a cartwheel.
L

Annika Schleu going viral, but is now hated for the wrong reasons.

Loads more but these are the ones that really moved me the most.

Diving: Jennifer Abel and Tom Daley's joy and emotion when they each medalled in their first events.

I saw maybe 5/46 sports, just wasn't that interested in much of what my coverage was showing. Watched some Gym and Athletics when it was on but casually so not invested emotionally.

Damian Warner - Gold medal AND 9000 points in the decathlon

Maggie MacNeil - Squinting at the scoreboard to see her time and realizing she won Gold.

Too many to name!

Team GB finishes in the top 4 for the fourth Olympics running. And Brexit Britain completely demolishes every other country in the EU, obviously much to the disappointment of the dentally challenged buffoon, Guy Verhofstadt!! 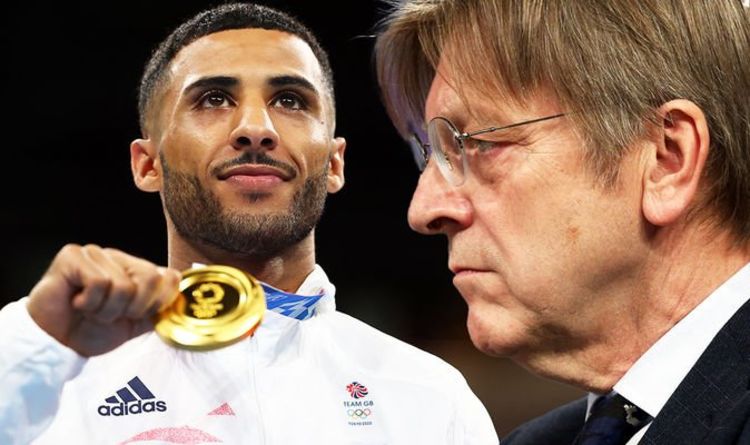 GUY VERHOFSTADT has been teased by Brexiteers with Britain's current Olympic gold medal tally more than double that of Germany and France combined - and 17 more than his native Belgium.

Maofan7 said:
Team GB finishes in the top 4 for the fourth Olympics running. And Brexit Britain completely demolishes every other country in the EU, obviously much to the disappointment of the dentally challenged buffoon, Guy Verhofstadt!!
Click to expand...

How sad that you felt the need to make a political statement mocking various countries in a thread meant to celebrate the best of these games.

Carissa Moore, a native Hawaiian, winning the first gold medal in women's surfing, a hundred years after Duke Kahanamoku began to advocate for its inclusion in the Olympic games. Mahalo to Japan.
L

MsZem said:
How sad that you felt the need to make a political statement belittling various countries in a thread meant to celebrate the best of these games.
Click to expand...

but it was going to come up, why are websites posting medal tallies then ?

I was sure after these games it was going to used in politics
wether in Britain or elsewhere.

Germany just had the back luck in these games. France I think kept the same number of golds but lower medals total

Maofan7 said:
Team GB finishes in the top 4 for the fourth Olympics running. And Brexit Britain completely demolishes every other country in the EU, obviously much to the disappointment of the dentally challenged buffoon, Guy Verhofstadt!!

GUY VERHOFSTADT has been teased by Brexiteers with Britain's current Olympic gold medal tally more than double that of Germany and France combined - and 17 more than his native Belgium.

If there was a gold medal for twattery, you would win hands down.
L

allezfred said:
If there was a gold medal for twattery, you would win hands down.
Click to expand...

but isn't it true though, Boris will use this Games for his own political gain ?

love_skate2011 said:
but isn't it true though, Boris will use this Games for his own political gain ?
Click to expand...

Something I liked here that we'd already seen in some other events (e.g. Worlds this year): the athletes giving themselves the medals, and especially teammates giving each other the medals. They're the ones who earned them, so by all means - leave out the middleman!

IIRC in one of the ceremonies with two bronze medalists they gave each other the flowers, which was also sweet

I really enjoyed the Canadian women’s soccer gold medal game the crazy ending. Also enjoyed yelling at the tv cheering support during the track events. The gymnastics were fun too. I really enjoyed all aspects of the Olympics.
You must log in or register to reply here.

Actors that have moved past iconic breakthrough roles