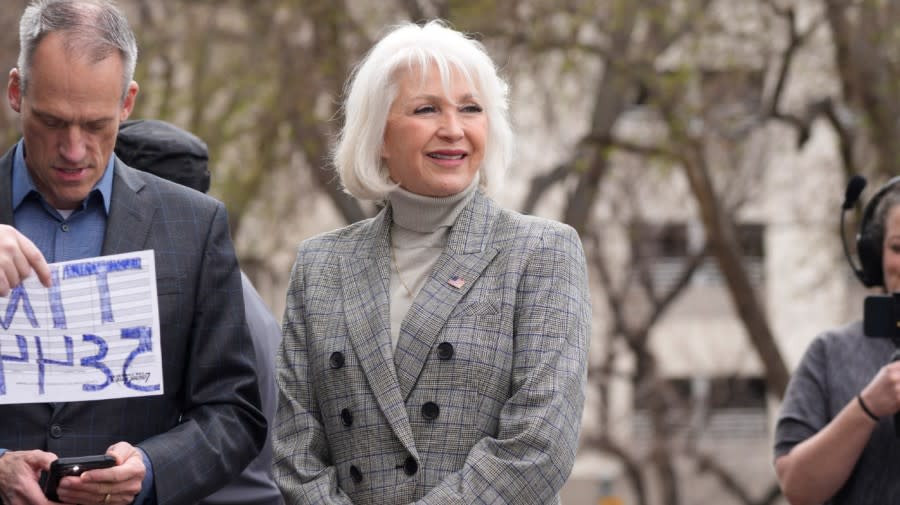 After raising $250,000 for a recount of Colorado’s Republican primary for secretary of state, far-right candidate Tina Peters has lost her race for a second time. The Denver Post reported Thursday that the Mesa County clerk lost by more than 88,000 votes to more moderate Republican Pam Anderson...

attyfan said:
There will also be a phase for punitive damages: 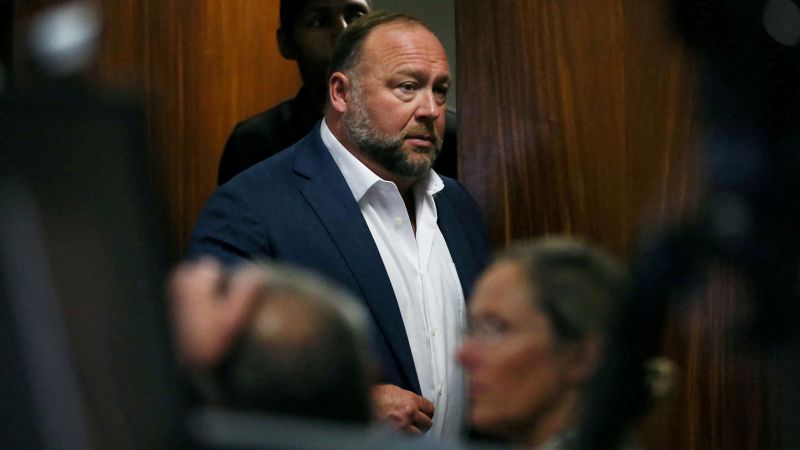 Right-wing talk show host Alex Jones will have to pay the parents of a Sandy Hook shooting victim a little more than $4 million in compensatory damages, a jury decided Thursday, capping a stunning and dramatic case that showcased for the public the real-world harm inflicted by viral conspiracy...

An opinion (Bankston) as to what would be considered within the realm of reasonable as to punitive damages:

FYI that this happened today regarding the FBI and Kavanagh during a Senate Judiciary hearing:

Democrats control the house they can impeach kavanagh today.

Dobre said:
FYI that this happened today regarding the FBI and Kavanagh during a Senate Judiciary hearing:

So what difference will it make now? Kavanagh is appointed/confirmed for life. Even if he is impeached it would take 60 votes to remove him. That won't happen-my guess is 'Ole Kavie knows where every single Republican Senator bones are buried
D

once_upon said:
So what difference will it make now?
Click to expand...

For starters, it could lead to new protocols wherein the FBI needs to do its own investigating of judicial nominees prior to or alongside White House direction. Per Mr. Wray, letting the White House run the show has been the norm with judicial nominees? Based on the clips, it sounds like Senator Whitehouse does intend to move forward on some process in a month; but it's just a clip so I don't know what that planned process is. I googled the topic to see if there was a corresponding article, but I didn't find anything more informative. 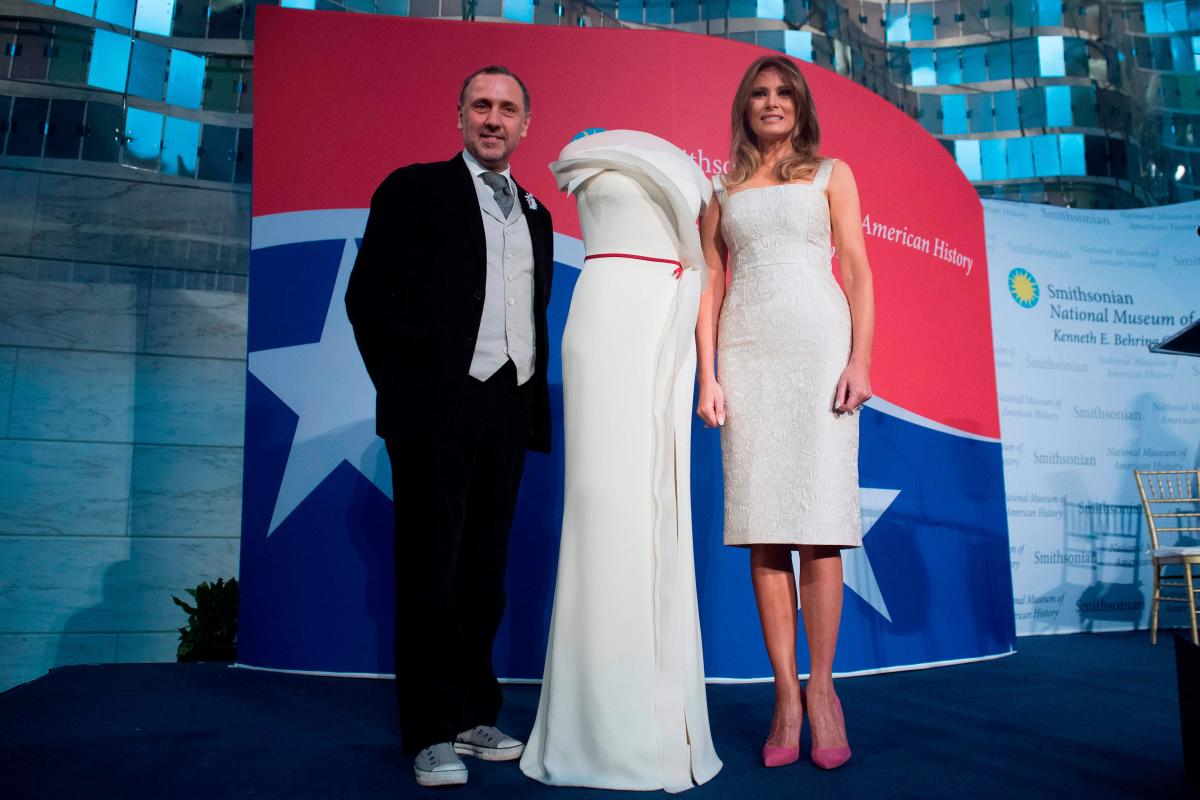 The payments to Hervé Pierre Braillard offer a window into the many ways Trump, who is not a candidate for office, is allowed to use his PAC money. 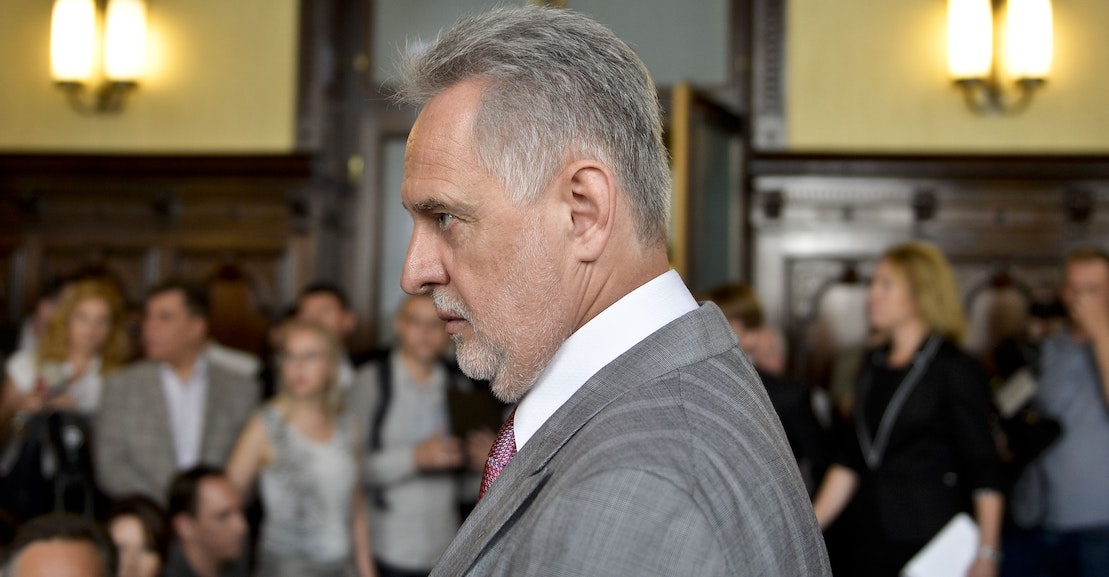 Fresh reporting illuminates the role that Dmitro Firtash played in funding the operation that would end in Trump's first impeachment.

"For the past few years, as Rudy Giuliani gallivanted around the world looking for any kind of conspiracy that could help then-President Donald Trump remain in office, one question hung over Giuliani’s rambles: Who actually paid for his travels?

Thanks to a report in this week’s New York Times, we have a better idea. Giuliani’s paymaster wasn’t his client, nor was it any of the other Americans in the conspiratorial cabal working to help Trump steal the 2020 election. Instead, Rudy’s benefactor was the pro-Putin oligarch who stood at the center of Trump’s first impeachment—and who arguably stood to gain most by Trump retaining the White House: Dmitro Firtash.

As the Times reported, text messages and interviews revealed that the company overseen by Firtash—a Ukrainian kleptocrat currently awaiting extradition to the U.S. on bribery-related charges—footed the bill for much of Giuliani’s travels. Not only did Firtash’s company pay for Giuliani’s stay in at least one luxury hotel, but it paid tens of thousands of dollars for Giuliani’s flights around the world, including one trip on a private jet that cost a staggering $36,000.

At a minimum, these revelations confirm what was long suspected: A post-Soviet oligarch connected to multiple members of Giuliani’s team was also financing his travels. And it looks like Giuliani was able to obtain Firtash’s scratch with relative ease—a single text message would often do the trick. “Running into money difficulties on trip to London,” Giuliani wrote to Firtash’s translator, referring to an upcoming meeting with the oligarch’s associates. Voila, private planes and luxury hotels were at Giuliani’s disposal in short order.
The news that an oligarch wanted in the U.S. for various and sundry crimes was secretly funding the American president’s lawyer would, in a perfect world, be a scandal unto itself. But the revelations regarding Giuliani and Firtash—an “upper-echelon [associate] of Russian organized crime,” per the DOJ, and a Putin ally to boot—go much further than Gulfstreams and gilded hotels, and point directly to just how open, and corruptible, the Trump White House was.
Click to expand...

And both parties deny knowing anything about the transactions

A company owned by a prominent Ukrainian oligarch covered thousands of dollars in former New York Mayor Rudy Giuliani's travel expenses in the summer of 2019, The New York Times reported.

At the time, Giuliani was working as President Donald Trump's personal lawyer and spearheading an effort to dig up dirt on the Biden family in Ukraine.

According to The Times, in the summer of 2019, Firtash's company bankrolled Giuliani's stay at a five-star hotel and also arranged for him to fly on a private jet.

Robert Costello, Giuliani's lawyer, told The Times that his client had "no idea that Firtash was paying for those trips" and that "he certainly would not have allowed it if he had known."

Firtash's lawyer, Lanny Davis, also said that "as far as Mr. Firtash knew, he never paid for or authorized any funds to be paid for Giuliani."
Click to expand...

I cannot believe what rubes Trumps's supporters are! 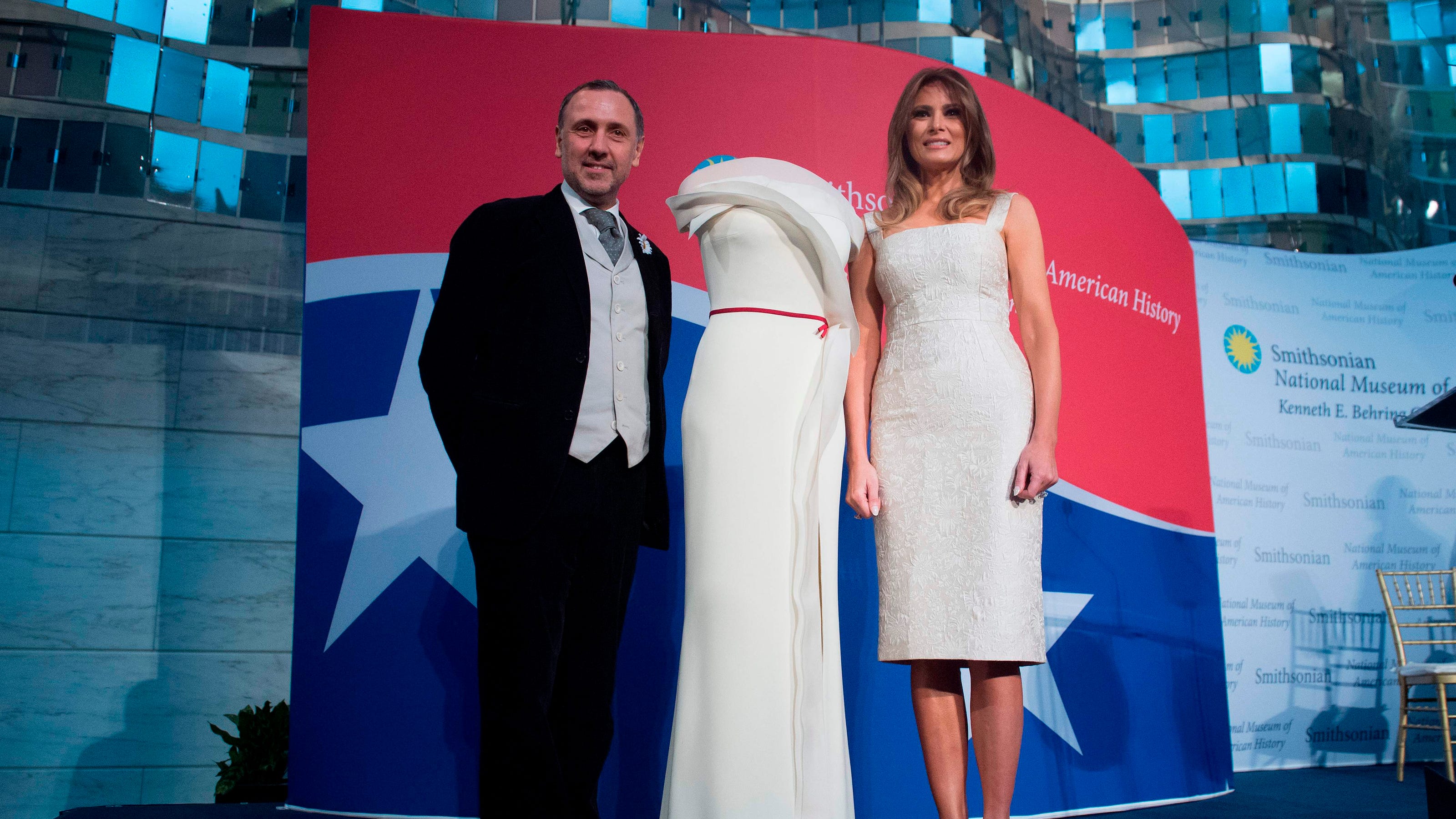 The payments to Hervé Pierre Braillard offer a window into the many ways Trump, who is not a candidate for office, is allowed to use his PAC money.
www.usatoday.com
S

Some very interesting facts from the local CT publication about the assertion from Alex Jones that his company is bankrupt:

Anyway. Alex Jones. Right. He went on the air yesterday after the jury handed down a $4.1 million verdict for compensatory damages to say how “broke” he was:

“It's your decision just like the jury had a decision right now or whether Infowars is going to stay on the air. We are so broke and I'm not even worried about that $4.2 million. I'm worried about our bankruptcy to emergency stabilize Infowars, and we have a plan. But to do that we need support.”

Jarrod Martin, representing the families in bankruptcy court, said the whole thing is in “bad faith.”

“The largest debt right now is a little over $50 million to an entity called PQPR which is controlled by Dr. David Jones,” Martin said. “But 80 percent ownership of that company is held through a company that Alex Jones controls.”

David Jones is Alex Jones’ father, which I didn’t know. Martin said the goal of the bankruptcy is three-fold.

First, “One goal was to delay the Connecticut lawsuit because that jury was about to be picked and that has been delayed because the lawsuit was removed to federal bankruptcy court in Connecticut,” he said.

“Goal number two is probably trying to legitimize that PQPR debt through the bankruptcy process,” but Martin believes the third goal is “to negotiate some type of payment plan” that “won't completely sink” Jones’ company.

“Just one jury award has come in, on Heslin and Lewis, and compensatory alone was $4 million,” Martin said. “You have punitives coming this morning and that's just one trial. There's many more to come and so you can see that, quickly, these will start to add up into 100-plus million dollar territory.”

Orange Is the New Black, I guess.
D

"Over a week ago, Trump said he would file a lawsuit against CNN. There is still no lawsuit filed, but now he's fundraising off it, begging supporters to give money to "support" the legal action."

In the Alex Jones punitive phase of the trial, it was just reported on MSNBC, that the jury came back with $45.2 million in addition to the $4.11 million assessed yesterday
S

These people have no shame.

The Feds need to get Roger Stone. I hope DOJ is lining up witnesses and evidence.

They're all just master grifters.
D

As anticipated, Alex Jones' lawyer may face malpractice charges based on his "accidental" release of Jones' text messages to the plaintiffs.

It says, "Jones could pursue a malpractice claim against his attorneys, but would have to prove that he would have had a better result from the Texas trial if the phone information hadn't been handed over, said Randy Johnston, a legal malpractice lawyer in Dallas."

So it's not really clear there.

However, "A Connecticut state judge overseeing another Sandy Hook defamation case against Jones on Thursday ordered Reynal and another Jones lawyer, Norm Pattis, to appear later this month for hearings to consider sanctions or other discipline over their "purported" unauthorized release of Sandy Hook plaintiffs’ medical records."

The lawyer the reporter interviewed for the article also says, "the Sandy Hook parents could ask for sanctions against the lawyers and possibly Jones for failing to share relevant portions of the phone data earlier, and there might be a court inquiry into whether other information was not properly disclosed."

And the article wraps up with this: "Toward the end of Friday's proceedings, Reynal told Gamble that he became aware of the inadvertent phone disclosure while Jones was testifying on Wednesday.

'That's not true,' the judge responded, telling Reynal that he had given her an email showing he had been aware 12 days earlier." 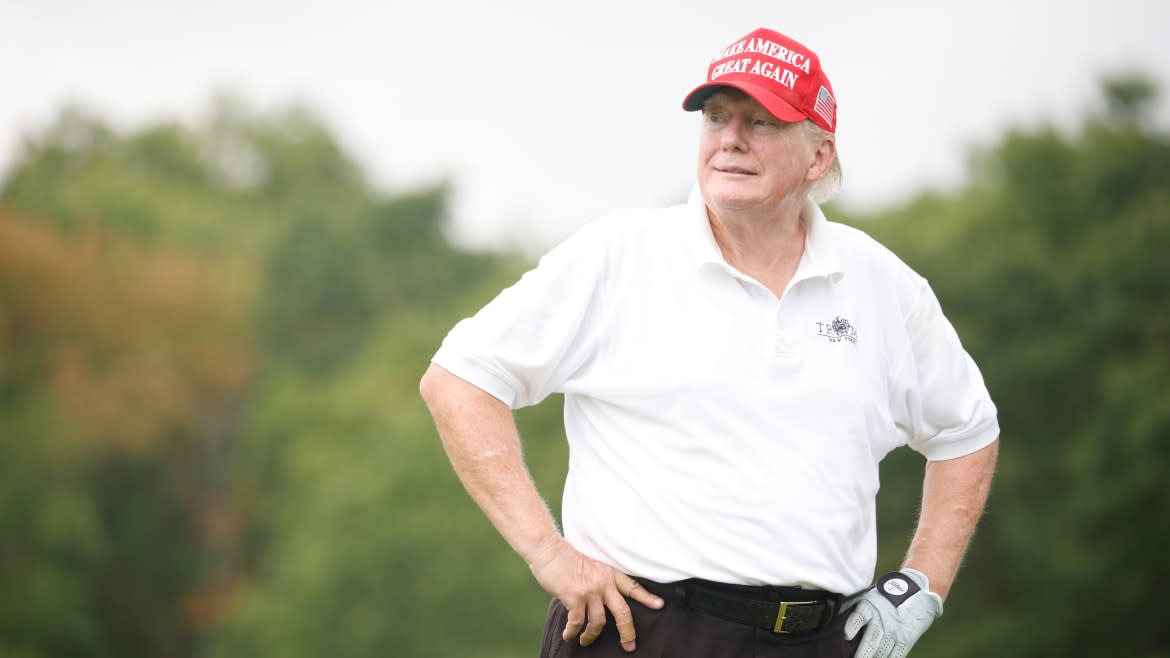 Trump Begs Supporters to Donate for ‘Upcoming’ Lawsuit Against CNN

Cliff Hawkins/GettyIt’s been over a week since former President Donald Trump pledged that he would be filing a lawsuit against CNN. Yet, instead of court documents being filed, Trump appears to be more preoccupied with begging followers to send in money to “support” the so far non-existent legal...

Another interview clip from the lawyer for the plaintiffs in the Alex Jones case:

It sounds like they have a long process ahead of them in order to actually collect the full punitive damages, but that he/his firm will be headed to the Jones' bankruptcy court in order to start the process to get it done.

Not sure whether to put this here or in the Biden thread but I'll put it here. 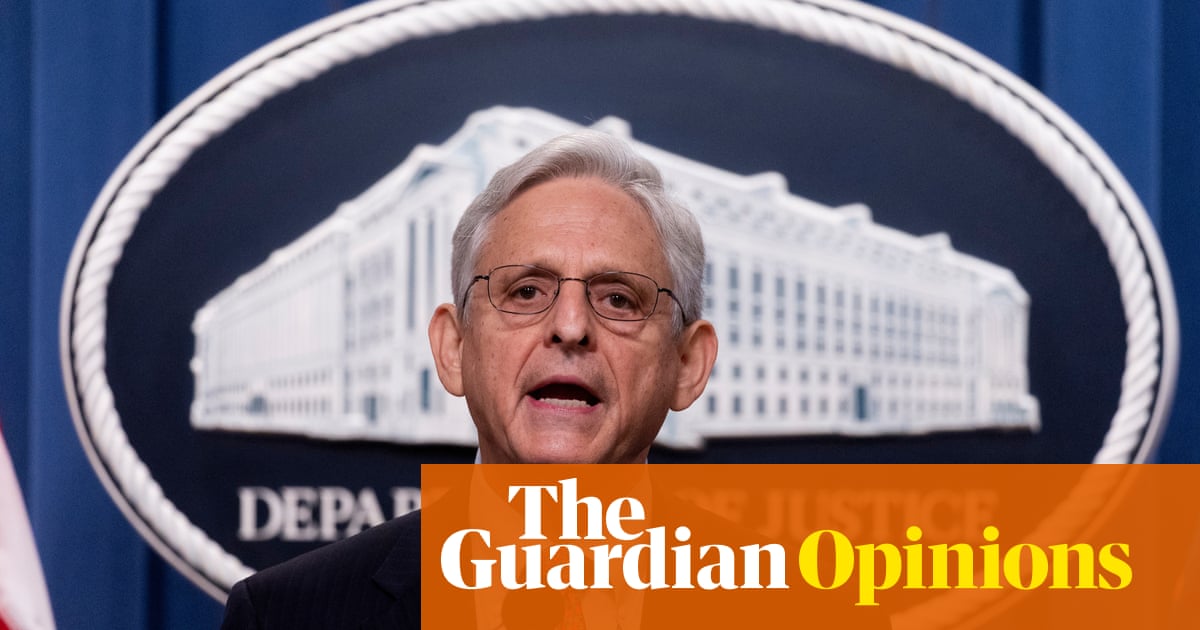 Time is running out. The justice department must indict Trump | Laurence H Tribe and Dennis Aftergut

If Trump or any of the likely Republican nominees win in 2024, they will immediately move to protect those who attempted to overturn the 2020 election

Trump claiming the assassination plot on Governor Whitmer was fake. I see why Alex Jones gives me such Trump vibes:

Dobre said:
Trump claiming the assassination plot on Governor Whitmer was fake. I see why Alex Jones gives me such Trump vibes:

They were found not guilty because so much drive for the assassination was by FBI informants. If the FBI informants were just silent observers or go along people it would have been different. Instead the FBI people were the ones going “kill her! Kill her!”
Last edited: Aug 8, 2022
D

Article on the Trump Administration's family separation policy for immigrants.
(I can't access it right now, but I wanted to save the link). 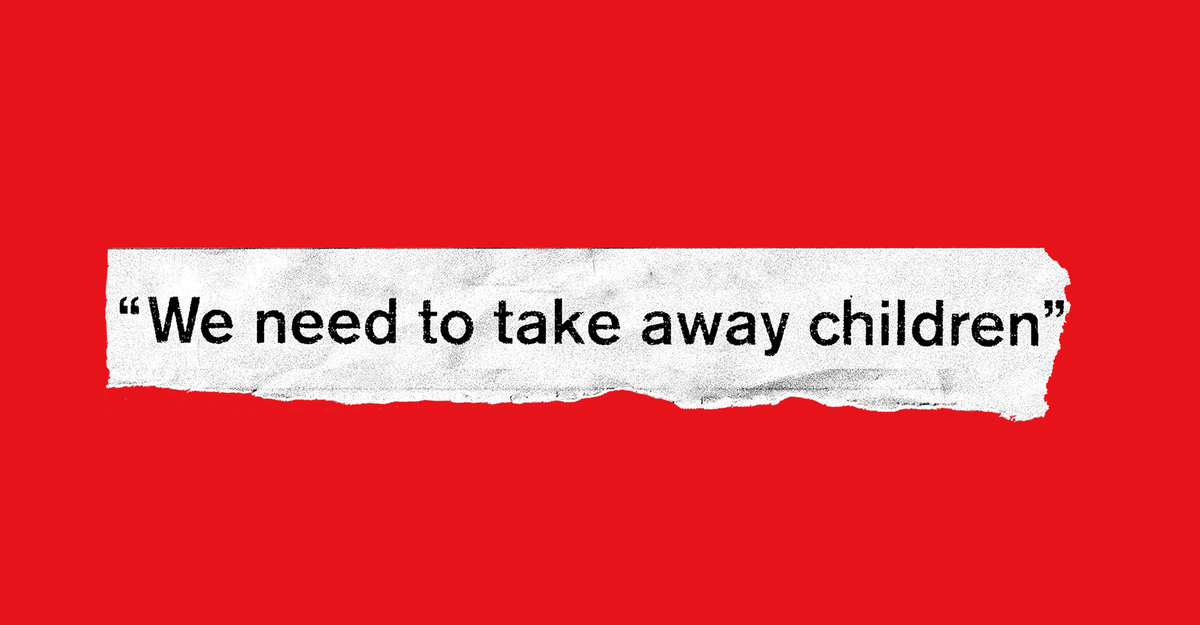 See if this link works (they don't appear to have a gift link option, but they do have a "share" option):

Thank you for trying, @BittyBug. It says to sign up for a free trial. (I'm not going to do that because I will forget to un-sign up, but it is an option for people).
You must log in or register to reply here.