Let's have a new thread and remove the contagion going forward from the other threads.

I offer this about Trump supporter Marjorie Taylor Greene:

In 2018, after the shooting at Marjory Stoneman Douglas High School in Parkland, Fla., Rep. Marjorie Taylor Greene, then a right-wing online commentator, spread the noxious conspiracy theory that the massacre was a “false flag” event intended to take away people’s guns.
Click to expand...

I guess we could call this thread Liars and their vile lies: Trump and Trump supporters.

I repeat, I can't believe that anyone who today says "I am a Trump supporter" expects to be treated like a respectable person. Trump tried to subvert our constitutional order. You expect a polite reception for supporting that?
S

And the Lincoln Project weighs in:

Democrats control the house they can vote to expel greene today

This is silly. Why not talk about Biden trying to pass dreamer bill? No you want to talk about irrelevant powerless people like greens!!

Fact: republicans have no power in DC for two years.

Get over People voting for Trump.

Democrats have won all the power in America. All of it
Last edited: Jan 19, 2021 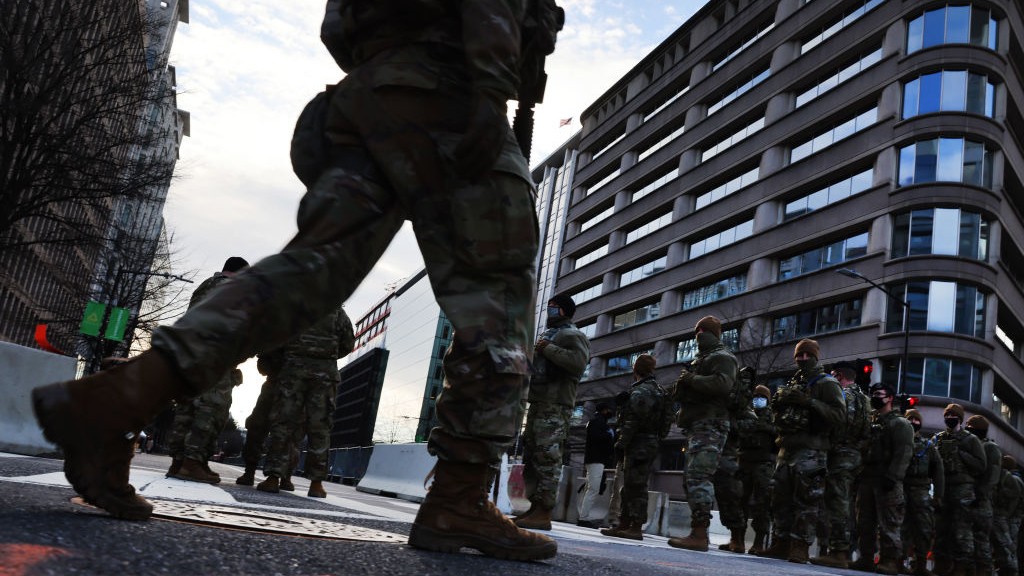 Pentagon officials say 12 Army National Guard members have been removed from securing President-elect Joe Biden’s inauguration after vetting by the FBI, including two who posted and texted extremist views about Wednesday’s event. There was no specific threat to Biden. Two U.S. officials told The...

Some people who respond to the PI threads have mentioned that "there wasn't any proof" that Right wing or white supremacists were affiliated with law enforcement or military. Yet, we're seeing the FBI, DOJ, DOD and other organizations arresting folks with ties to these same organizations. So we're seeing in real time that YES, there is a connection between white supremacy, anti blackness and that members of these organizations are at every level of civil service.

“Today’s decision is the perfect Inauguration Day present for America,'' said Ben Levitan, a lawyer for the Environmental Defense Fund, one of the groups that had challenged the Trump rule in court. The ruling “confirms that the Trump administration’s dubious attempt to get rid of common-sense limits on climate pollution from power plants was illegal,'' Levitan said. "Now we can turn to the critically important work of protecting Americans from climate change and creating new clean energy jobs.”
Click to expand...

But Rep. Kathy Castor, D-Fla., chairwoman of the House Select Committee on the Climate Crisis, called the ruling a timely rejection of Trump's effort to roll back the Obama-era Clean Power Plan. “It looks like we’re kicking off a new era of clean energy progress a day early,” Castor said. "It’s almost poetic to see our courts vacate this short-sighted and harmful policy on Trump’s last full day in office.''
Click to expand...

I think that I shall never see
A poem lovely as a tree.

Copied from the other Trump thread (sorry @BlueRidge I didn't see that you had started this one):

One of the "alt" accounts on Twitter (run by rogue government staff) says that Trump's cabinet had passed a motion to invoke the 25th Amendment if necessary, and had told Trump they would remove him if he tried to impose martial law or grab power any other way during the last days of his term. Amazingly, he took them seriously and didn't try anything that he might have been planning.

This apparently explains why most of the cabinet (the ones who didn't quit) were out of the public eye during the last week.

I really want to know what the Qnuts are saying. But I don't want to go searching for it!

NEW: Olympic swimmer Klete Keller is ordered to surrender his passport, remain in state of Colorado and NOT to drink "excessively" by judge handling his criminal case tied to Jan 6 US Capitol insurrection 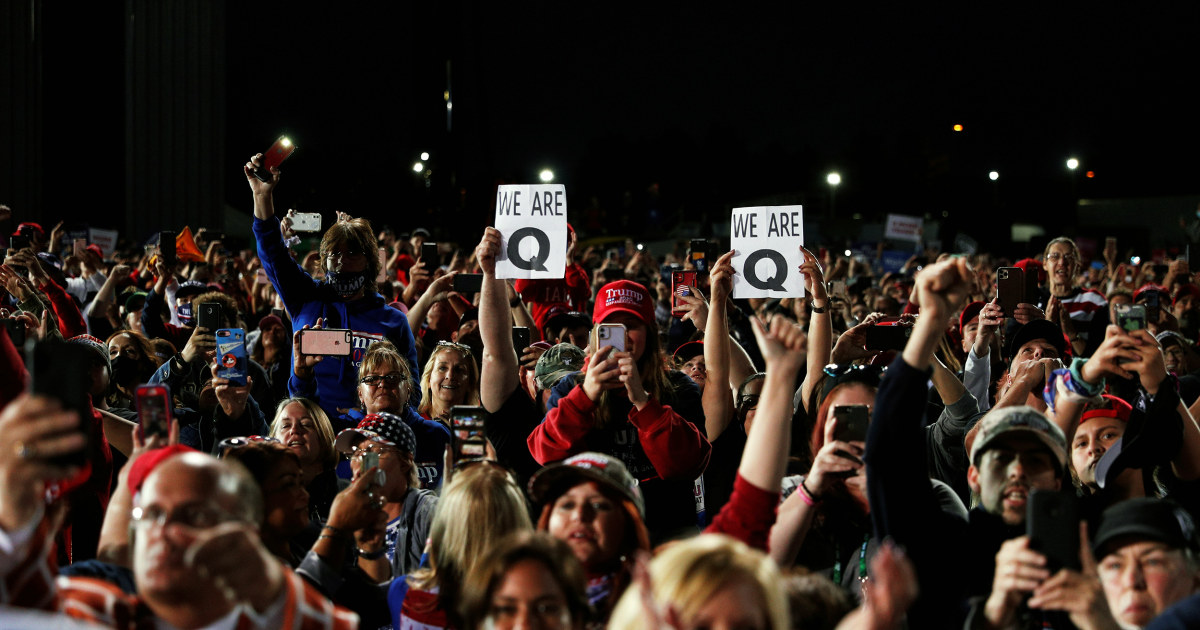 'We all just got played': Some QAnon followers lose hope as dreams of a bloody inauguration coup fail to materialize

"I don't think this is supposed to happen," one QAnon follower posted as Joe Biden was sworn in.

Same but with people saying Trump would be arrested or indicted by now.

Looks like the far right aka Trumpworld will fracture:

In a Nov. 8 post in a private channel of the messaging app Telegram, the group urged its followers to attend protests against an election that it said had been fraudulently stolen from Mr. Trump. “Hail Emperor Trump,” the Proud Boys wrote.

But by this week, the group’s attitude toward Mr. Trump had changed. “Trump will go down as a total failure,” the Proud Boys said in the same Telegram channel on Monday.

As Mr. Trump departed the White House on Wednesday, the Proud Boys, once among his staunchest supporters, have also started leaving his side. In dozens of conversations on social media sites like Gab and Telegram, members of the group have begun calling Mr. Trump a “shill” and “extraordinarily weak,” according to messages reviewed by The New York Times. They have also urged supporters to stop attending rallies and protests held for Mr. Trump or the Republican Party.
Click to expand...

Grievance politics is not going away of course, but without Trump as a figurehead the far right may not be able to pull together enough power to do much, other than isolated acts of violence.

If you follow ParlerTakes on Twitter, he posts a bunch of stuff from Parler and a lot of it is QAnon stuff.
A

BlueRidge said:
Looks like the far right aka Trumpworld will fracture:

BlueRidge said:
Looks like the far right aka Trumpworld will fracture:

Grievance politics is not going away of course, but without Trump as a figurehead the far right may not be able to pull together enough power to do much, other than isolated acts of violence.
Click to expand...

So become a BLM

The 2024 republican primary will show all of course

Believer in woman's right to own healthcare decisi

caseyedwards said:
So become a BLM
Click to expand...

I am pleased that Trump did not pardon any of them.

BLM doesn’t have a lot of political power but can definitely do a violent protest. So that’s what was being talked about with regard to trump supporters

28 former Trump officials have been sanctioned by China. https://www.npr.org/2021/01/20/9589...dministration-officials-including-mike-pompeo

In a statement released just minutes after President Biden took office, China's foreign ministry said it had decided to sanction those "who have seriously violated China's sovereignty and who have been mainly responsible for such U.S. moves on China-related issues."
Click to expand...

caseyedwards said:
BLM doesn’t have a lot of political power but can definitely do a violent protest. So that’s what was being talked about with regard to trump supporters
Click to expand...

The Trump supporters have already proved they can do a violent protest pretty well on their own.
L

topaz said:
that members of these organizations are at every level of civil service.
Click to expand...

I'm a federal employee and I'm sure if some of my colleagues were vetted in the same way, a few would be found to have to ties to such organizations.

And Ellis has been placed on administrative leave. https://www.washingtonpost.com/nati...d154e6-5b83-11eb-b8bd-ee36b1cd18bf_story.html

The NSA director, Gen. Paul Nakasone, placed Michael Ellis, a former Trump White House official, on leave pending an inquiry by the Pentagon inspector general into the circumstances of his selection as NSA general counsel, said the official, who spoke on the condition of anonymity because of the matter’s sensitivity.
Click to expand...

ballettmaus said:
And Ellis has been placed on administrative leave. https://www.washingtonpost.com/nati...d154e6-5b83-11eb-b8bd-ee36b1cd18bf_story.html
Click to expand...

Thank god. That guy was in a job with access to so much top-secret stuff, the last place you want a Trump mole.
A

James Corden performed a new version of One Day More from Les Miserables in honor of Trump's last day. Special guest Patti LuPone as an anti-masker.

From One Day More to No Days More!

Before trump the Republican Party was so pro China. They voted for MFN for China and wto for China and now they are cut off from making money from China! Do they want to be pro China anymore?

Amy L said:
One of the theories I've heard is that since the Bidens are moving in, the DT loyalists still planted in the White House will be there to catch them at their baby eating satanic rituals.
Click to expand...

These people don't understand (well really much of anything) that the only people left in the building after 12 noon are the permanent White House staff, whom they would refer to as the 'Deep State'. The only ones left are the security personal, cleaners, kitchen staff & cooks. Anyone who was hired as a political person by the Trump White House will have their pass deactivated at 12 noon.

Wasn't that Under Siege?

This is bats*** crazy. And apparently it is growing outside of our borders. How do so many people buy into this? Even after Trump departed and Biden took the oath...
You must log in or register to reply here.