Dancing With the Stars - Season 30

screech said:
There's actually a live audience this year, though. And I hate the effects, but I want to know what kind of vacuum or how many sweepers they have in the studio, to clear away the confetti every second couple uses at the end of their dance, in time for the next couple to take the floor.

And I've been over Carrie-Ann for about a decade. The least qualified and least helpful of all the judges. If they wanted a 'Fly Girl' as a judge, get Rosie Perez! Or Jennifer Lopez could guest judge one week, due to her Derek connection.

Also, Derek's going to be busy, doing a Vegas residency just for the period while DWTS is happening.
Click to expand...

I thought it was just people's families in that one section. The little bit I saw, the sides where the audience would be sitting at individual tables was a bunch of vertical lights?

screech said:
Or Jennifer Lopez could guest judge one week, due to her Derek connection.
Click to expand...

I miss watching World of Dance

vgerdes said:
Well... I'm thinking Tyra's $$$ investment in the show as one of its EPs probably got her the gig.
Click to expand...

Was she made an EP before becoming host, or did she become host, and EP was included in her contract?

screech said:
Was she made an EP before becoming host, or did she become host, and EP was included in her contract?
Click to expand...

I think the second part of your statement is true from what I remember .... she was given the host job and it included being an EP as part of the contract.

Thank you for bringing up the light issue! Peloton guy and Cheryl’s fushia coloured outfits also made my eyes burn under them.

I thought Witney, as is often the case, had the best costume. The less said about 2-personality guy, the better.

I did not know Sharna was dating BAG. I hardly recognized her. Her mouth is quite different.

DWTS started out not great, but improved every year for a while. Now it’s plateaud at a lesser level. I have no life right now, so I‘ll watch.

I'll watch it as long as JoJo is on because watching her makes me happy.

MacMadame said:
I'll watch it as long as JoJo is on because watching her makes me happy.
Click to expand...

I totally agree! Wow, she brings such joy to the dance floor!

Cheryl Burke has tested positive for *********, though she's fully vaccinated. I'm assuming that means that Cody will dance with a troupe member instead, unless they have an official rehearsal run-through recorded to be judged. Though I know the producers are picky about what is allowed to be presented to be judged.

Won't Cody have to quarantine now too?

MacMadame said:
Won't Cody have to quarantine now too?
Click to expand...

I would think so.

MacMadame said:
Won't Cody have to quarantine now too?
Click to expand...

He wasn’t there. They judged their rehearsal footage.
N

Cody and Cheryl were awesome even in rehearsal
D

Great job by Cheryl and Cody, but I doubt either will be back next week. Cheryl has to quarantine for 10 days from the onset of symptoms and if Cody remains asymptomatic, he'll have to quarantine for 14 days unless they allow him to shorten the time with testing (I think I heard he is vaxxed). But I think even then, the minimum time is 7 days.

Tyra looked like she was about to be eaten by her dress.

Loved Suni and Sasha and Jojo and Jenna. Amanda and Alan had a nice dance too. Ringo's appearance for Mel C was awesome.

Debbie S said:
Tyra looked like she was about to be eaten by her dress.
Click to expand...

Not sure how Cheryl/Cody are expected to take part next week, but I was impressed with their performance, considering it's a rehearsal. I may be misremembering, but IIRC in a previous season someone's rehearsal footage couldn't be judged because it wasn't done on the actual dance floor, and that person was eliminated?

Also, I'd love to see the screen in screen of the Judges reactions in EVERY performance!

Amanda was by far the best last night for me, though she needs to tone down her face a bit. Most underwhelming to me was Brian/Sharna. I wonder how long their relationship will keep them in the competition?

The judges scores seem really low the last couple of seasons. In other seasons, those getting 6s would be getting 7s for the same performances.

I forget whose rumba it was, but for someone you could see Bruno dancing along in the background, and I got major Brian Orser performing along with his students vibes. It made me smile.

And for a supermodel, Tyra sure doesn't pick great clothes to wear. Her first outfit made her look like she was wearing football player shoulder pads, and I don't know what to say about her second one...
Last edited: Sep 28, 2021

Now Cody has ********* too. It says his participation in the show is up in the air and they are still trying to figure that out.

I don't know if it's feasible, but I think the only way they could do it is if they are together in one of their homes and record their performance via webcam, since they wouldn't be able to send a camera person.

IMO this is a case where it sucks, but they will have to WD, no different than an unfortunate injury that takes someone out.

Cody and Cheryl are going to perform remotely tomorrow night:

Wait a minute .... so Cheryl will dance in her house and Cody will dance in his house? Do I understand that correctly? Maybe I don't cause that just sounds stupid.

Sorry they both got the CV but this should be handled like any other type of injury/health issue several others have had to deal with and they just have to withdraw. Thems the breaks 'n all.

I think they're dancing together in Cheryl's house.

I may be a bit jaded, but IMO if the first person to test positive had been someone like Britt, Pasha, or Brandon, I have no doubt that they and their partner would have been forced to withdraw. Since Cheryl is a seasoned favourite of the producers, it seems like they're bending over backwards for her.
Dancing in the living room is in no way the same as dancing in front of the judges, with the lights, multiple camera angles, the bad Ray Chew covers of songs, and the (limited) audience, and should not be judged as an accurate representation. I personally don't think they should be allowed to continue under these performance circumstances.

I think they should withdraw and the producers should guarantee Cody a spot on the next season.

It's so welrd how they're going forward with this. What if more of the dancers test positive?

I have to say, I'm surprised at how much I'm enjoying Olivia Jade. She was fantastic tonight. I also have huge respect for the way that she's not shying away from bringing up the college admissions scandal, but also isn't just focusing on it.

I'm not even watching this season, but - 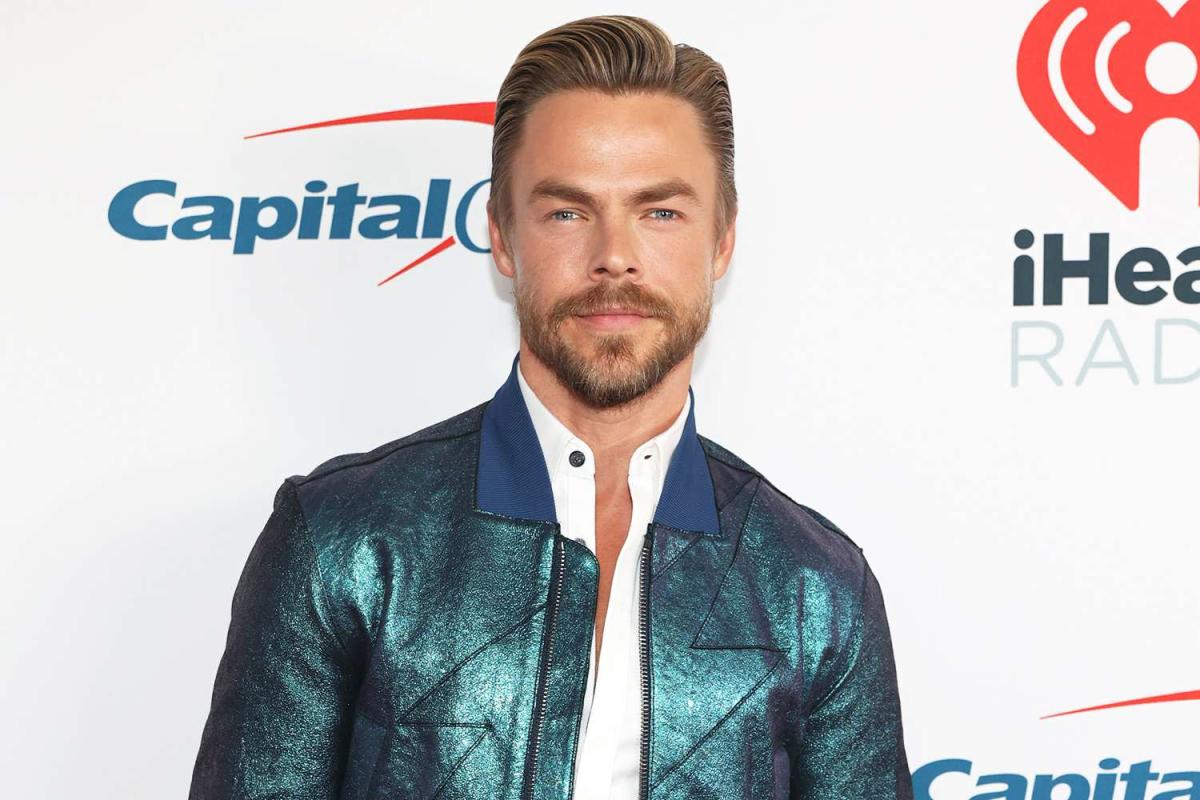 DWTS : Derek Hough Misses Week 3 'Out of an Abundance of Caution' Due to 'Potential COVID Exposure'

I'll say, Jojo lifting Jenna was...not bad at all. Better than many male celebs I've seen in all these years.

Lilia A said:
I'll say, Jojo lifting Jenna was...not bad at all. Better than many male celebs I've seen in all these years.
Click to expand...

JoJo really leads. Which is more than a lot of the guys do.

I am so over the Cody-Cheryl thing. They should have been eliminated last week. At least they didn't get inflated judges scores for that mess of non-ballroom dancing they did.

Right now I feel like the best dancers, in no particular order, are JoJo, Jan from the Office, Suni, and Olivia. I'm meh on Christine. I find her dancing stiff and introverted.

ETA I wrote this before Christine was eliminated.

I'm meh on Olivia. I feel that none of the students in the college admission scandal suffered any punishment & in Olivia's case it just made her more "famous". All these students had to pose for their purported sports so all of them knew what was going on & all were old enough to know it was wrong. It's just one of the ways in which DWTS (or maybe I should call it the Tyra show) has been ruined.

taf2002 said:
I'm meh on Olivia. I feel that none of the students in the college admission scandal suffered any punishment & in Olivia's case it just made her more "famous". All these students had to pose for their purported sports so all of them knew what was going on & all were old enough to know it was wrong. It's just one of the ways in which DWTS (or maybe I should call it the Tyra show) has been ruined.
Click to expand...

While I was really impressed with what Cheryl and Cody were able to pull off, I had some issues with it. First off, if Cheryl had a 'wind machine' then Cody should have as well. That bugged me. They were limited to a tiny space, whereas every other team had to fill a large dance floor. They had one camera angle, everyone else has many. They danced from different spaces, whereas everyone else had to dance side by side/together, and there would have been more nitpicks for unison.

I honestly think this should not be allowed. The situation sucks, but they should have had to WD (and as mentioned above, grant Cody a spot next season). This is completely unfair to the other contestants. In season 21 Kim Zolciak had to WD because doctors didn't clear her to fly to LA. They weren't given the option to compete in different circumstances. Per that season's Wikipedia:

After suffering mini-stroke Kim Zolciak-Biermann was able to rehearse, but her doctors refused to clear her for air travel. As a result, she was unable to attend the dress rehearsal and the live show, which, according to the show's rules, meant she would have to withdraw from the competition.
Click to expand...

So why were the rules changed for Cheryl/Cody?

screech said:
So why were the rules changed for Cheryl/Cody?
Click to expand...

I suspect they are worried that if other dancers test positive, they could run short on contestants before the season is over. So they aren't going to set a precedent by making Cody and Cheryl withdraw.
You must log in or register to reply here.