The letter sounds like it came straight out of Fox News's imagination.
D

BlueRidge said:
The letter sounds like it came straight out of Fox News's imagination.
Click to expand...

Sounds more like it was written by a miserable, jealous leftist.

You actually take this line seriously?

The idea of twinkling, colorful lights are a reminder of divisions that continue to run through our society,

Lefty elites usually have better grammar than that. All that brainwashing in college requires a lot of writing assignments, you know.

hoax (in which case it's even more amusing).

I'd say more, but I must go tend to the idea of the twinkling, colorful lights on my house, as it's starting to get dark and I need to remind my neighbors of my privilege as much as I possibly can.

The one person claims her neighbors got it too. So who knows?

A church was attacked in D.C. and the sign in front of it burned, in a terror act likened to a cross burning, yesterday after the MAGA rallies in D.C. Witnesses identified the attackers as members of the so-called Proud Boys.

Its being investigated as a hate crime.

The pastor of a historic D.C. church whose Black Lives Matter sign was torn down and burned in the street during Saturday’s chaotic pro-Trump “Million MAGA March” responded Sunday, saying the violent act was “reminiscent of cross burnings.”

“We are a resilient people who have trusted in God through slavery and the Underground Railroad, Jim Crow and the Civil Rights Movement, and now as we face an apparent rise in white supremacy,” Asbury United Methodist Church’s Rev. Ianther M. Mills wrote.

Last night demonstrators who were part of the MAGA gatherings tore down our Black Lives Matter sign and literally burned it in the street. The sign burning was captured on Twitter. It pained me especially to see our name, Asbury, in flames. For me it was reminiscent of cross burnings. Seeing this act on video made me both indignant and determined to fight the evil that has reared its ugly head. We had been so confident that no one would ever vandalize the church, but it has happened.”
Click to expand...

I happened to have walked by this church on Friday and appreciated the sign on the historic building. Its disgusting to think this occurred.

Here is a statement from the Washington National Cathedral (Episcopal) on Saturday night's hate crimes:

The racist and religious overtones surrounding the effort to discredit the presidential election were on ugly display in downtown Washington on Saturday night, just blocks from the White House.

After a pro-Trump rally that aimed to overturn the will of the people in the presidential election, demonstrators and members of the Proud Boys ripped down Black Lives Matter banners outside two historically Black congregations, Asbury United Methodist Church and Metropolitan AME Church. In a chilling scene, one was set on fire as crowds chanted profanities.

We reject the version of Christianity that seeks to provide a mantle of spiritual authority to the poison of White nationalism. Religious leaders who bless these rallies, or lend their voice to the effort to subvert democracy, make a mockery of our faith. What we are witnessing is nothing less than idolatry–the worship of someone other than God as though he were God.

The blatant racism of this lost cause is alarming. The senior pastor of Asbury United Methodist Church was right to call the burning of her church’s banner a new version of cross burnings. White hoods have given way to black-and-gold militarism. Such hatred grieves the very heart of God, and we cannot turn a blind eye to such displays of white supremacy.

We believe that Black Lives Matter because Black lives matter to God. The Proud Boys and their hatred are not welcome here.
Click to expand...

I think this is publicly visible, post by a friend on FB of this morning at Asbury United Methodist Church:

Went by this morning and saw that people were in front of the church, I figured they were having a ceremony to re-install their sign.

D.C. houses of worship beef up security as Trump defenders descend on the nation’s capital​

D.C. police on Monday said they were putting special focus on houses of worship this week as supporters of President Trump who want to overturn his loss return to the city. They come weeks after another protest in which attendees vandalized four churches, including taking down and burning Black Lives Matter banners at two historical Black ones. One of those churches, Asbury Methodist, recently said a second banner was taken over Christmas week.
Click to expand...

Meanwhile, the leader of the Proud Boys, Tarrio, will not be in DC because he was arrested both for vandalism at a black church, but also for gun control violations in DC (possession of high capacity magazines and a high capacity feeding device).

He says it was not a hate crime.

There are permits for 10,000 attendees, but DC police expect more, according to Andrea Mitchell.

DORISPULASKI said:
There are permits for 10,000 attendees, but DC police expect more, according to Andrea Mitchell.
Click to expand...

I believe the vast majority of the people attending these "first amendment activities" (as the city calls them) have no interest in vandalizing churches or beating people up. I believe their anti-democracy views are reprehensible but they do have the first amendment right to gather in D.C. It is unfortunate that Proud Boys and others will use that as cover to commit hate crimes and violence.

Yes, this is a similar amount to the first demonstrations after the election, which were peaceful during the day at least, and got violent at night, mostly due to proud boy types.

One aspect of the hate on display at the Capitol. Virulent anti-semitism pervades the far right.

Throughout Trump's presidency he refused to distance himself from the far right and once they had sacked the Capitol on Wednesday, he put out a video taped message to them in which he said, "We love you. You are very special."

A scholar of American anti-Semitism explains the hate symbols present during the US Capitol riot (theconversation.com)
A

PRlady said:
So here's a story from the mainstream Jewish news service about how many American Jews are looking for backup passports, and why: https://www.jta.org/2020/10/01/unit...n-growing-numbers-of-us-jews-consider-leaving

ETA: They're not leaving because of antifa. https://religionnews.com/2020/09/14...every-issue-but-may-have-lost-ground-overall/
Click to expand...

Well, so far there is an influx of American Jews (mostly orthodox) who move in hordes to Israel, but mostly because the US Health System is such a disgrace

Andrey aka Pushkin said:
Well, so far there is an influx of American Jews (mostly orthodox) who move in hordes to Israel, but mostly because the US Health System is such a disgrace 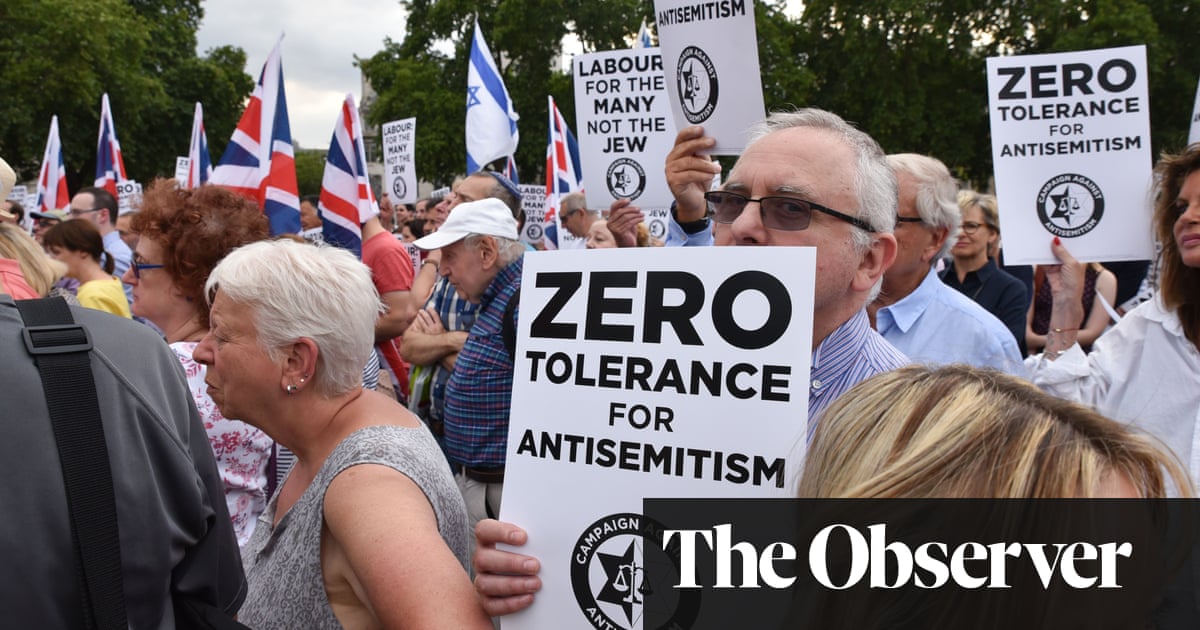 Half of British Jews will not display public sign of Judaism

Figure is highest since 2016, but end of Corbyn’s Labour leadership given as reason for renewed optimism

Almost half of British Jews avoid showing visible signs of their Judaism in public, such as a Star of David or a kippah (skullcap), because of antisemitism, a new survey has found.

Among the general public, a similar proportion agreed with one or more antisemitic statements put to them, pointing to a “deeply troubling normalisation of antisemitism”, the study’s authors said. The Campaign Against Antisemitism and King’s College London gave 12 statements that participants in the survey were asked to agree or disagree with. More than half (55%) of people did not affirm a single statement, with 45% agreeing with one or more.
Click to expand...

This does not surprise me one bit. It does, however, make me stop and consider whether the reason why I don't wear "visible signs" is because my American-born parents and their immigrant parents before them created a family culture of assimilation that included not wearing them in order to avoid antisemitism.
D

Disturbing, but probably all too common. Most educators would not be dumb enough to put their racist, hateful thoughts in writing for their students to see.
I

Saturday Night Live is now in controversy after Michael Che said this joke during Weekend Update.

This is my favorite response:

The "joke" is absolutely anti-Semitic. He said "Jewish", not "Israeli". And it's also completely ignorant - the Israeli population is composed of Jews, Muslims and Christians. All have received the vaccine. And Palestinians working in Israel have either already received the vaccine or will shortly.
I

Debbie S said:
The "joke" is absolutely anti-Semitic. He said "Jewish", not "Israeli". And it's also completely ignorant - the Israeli population is composed of Jews, Muslims and Christians. All have received the vaccine. And Palestinians working in Israel have either already received the vaccine or will shortly.
Click to expand...

What’s insane is that it wasn’t an “off the cuff” joke. It was written by a team of writers. And then said during at least one rehearsal. And no one raised their hand and raised an issue with it?

MacMadame said:
This is my favorite response:
Click to expand...

I expected better from you.
M

MsZem said:
I expected better from you.
Click to expand...

MsZem said:
I expected better from you.
Click to expand...

I am not a fan of the Israeli government.

Aw. I don't remember pissing in your corn flakes.

ilovepaydays said:
What’s insane is that it wasn’t an “off the cuff” joke. It was written by a team of writers. And then said during at least one rehearsal. And no one raised their hand and raised an issue with it?

So many liberals view Israel and all the Jews in it as totally awful now! Democrats have not punished omar or tlaib in any way. Jews are ok if they are not zionists

MacMadame said:
I am not a fan of the Israeli government.
Click to expand...

Neither am I. The joke was still gross and the colonizer quip you chose to share was obnoxious.

MsZem said:
Neither am I. The joke was still gross and the colonizer quip you chose to share was obnoxious.
Click to expand...

MsZem said:
Neither am I. The joke was still gross and the colonizer quip you chose to share was obnoxious.
Click to expand...

I have a hard time understanding twitter content, so I'm not clear about what was shared or what @MacMadame was approving ot, but if the "colonizer" quip meant to call Jewish Israelis colonists then in my book that was anti-semitic.
You must log in or register to reply here.