I was really happy for him at ACI after his SP, too bad about his FS

Wow. That jump was a work of art.

It is always exciting to see more skaters from around the world participate and move up the levels. 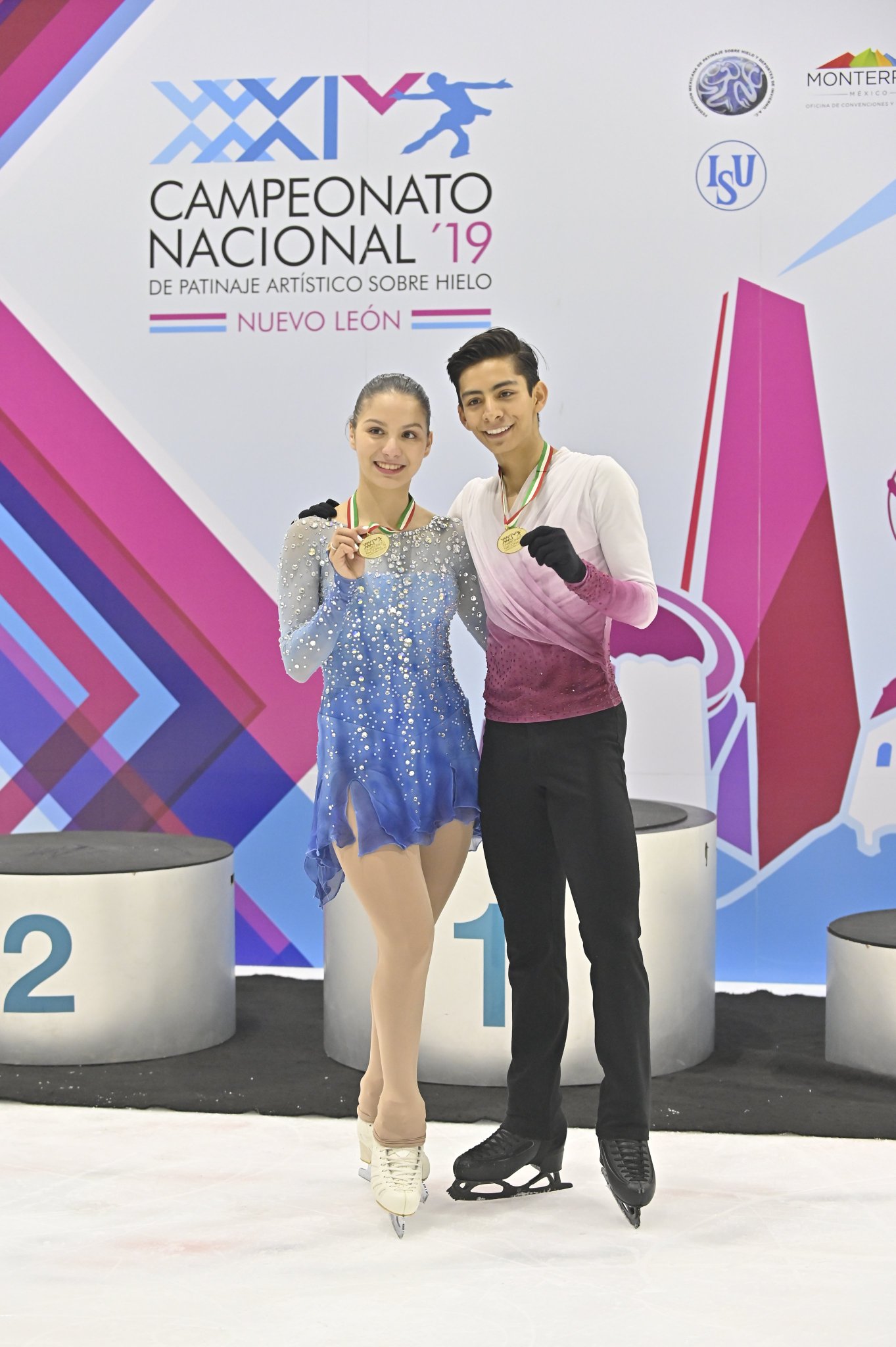 Bumping because he’s currently in such good form and did really well at 4 Continents and he was so freakin close to reaching the minimum tech score for Worlds and now he’s getting a chance to do so by competing at Challenge Cup!! So freakin excited to see him doing so good!!
he finished 15th at 4 Continents!!
I can’t remember any other Mexican skater finishing that high.

Apóyame – Donovan Carrillo
You have the option to set up a recurring donation through PayPal as well which is pretty cool.
Toodles.

aemeraldrainc said:
Bumping because he’s currently in such good form and did really well at 4 Continents and he was so freakin close to reaching the minimum tech score for Worlds and now he’s getting a chance to do so by competing at Challenge Cup!! So freakin excited to see him doing so good!!
he finished 15th at 4 Continents!!
I can’t remember any other Mexican skater finishing that high.
Click to expand...

I was so pissed at the judges. He missed the minimums by .20!

We all need to light candles for Donovan.

I agree. I mean he skated really well. I'm so glad he's getting another chance. Give it to him!

Donovan got 4-5K more Instagram followers since the beginning of the month, bringing his total to 39K.

Catching up with Donovan Carrillo
June 10, 2020
By Judith Dombrowski
Photo © Polymnia, Judith Dombrowski, Joy Geurts
Special thanks to Charlie di Oliver for the help with this interview.
http://www.absoluteskating.com/index.php?cat=interviews&id=2020donovancarrillo

CONGRATULATIONS TO DONOVAN on officially earning an Olympic spot for Mexico with his 20th place finish at 2021 Worlds in Stockholm!

Sylvia said:
CONGRATULATIONS TO DONOVAN on officially earning an Olympic spot for Mexico with his 20th place finish at 2021 Worlds in Stockholm!

I’m loving how all these skaters (past and present) are being so supportive on Instagram. The figure skating community is truly tight-knit.
I’m proud and so happy for Donovan.
His hard work and sheer determination have brought him here and he deserves all the good things!
You got this, Donovan! 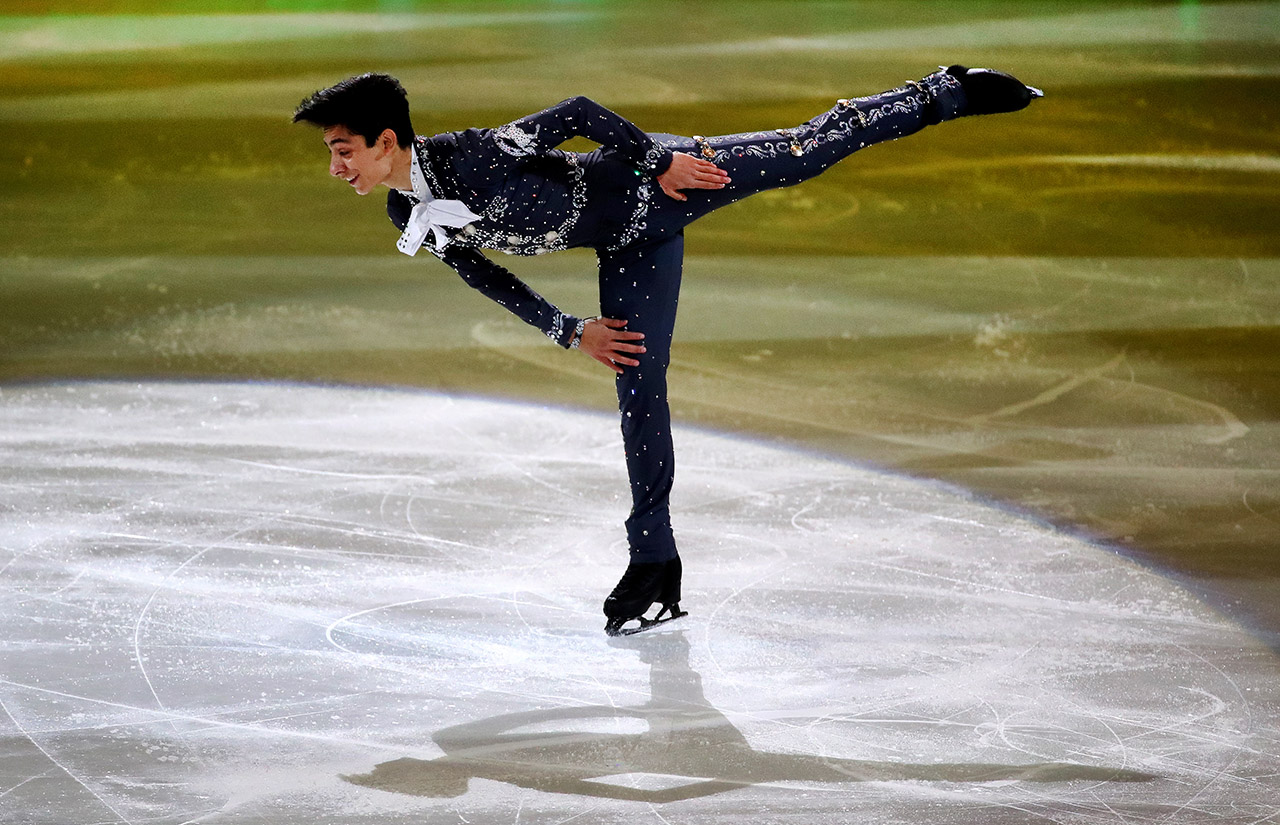 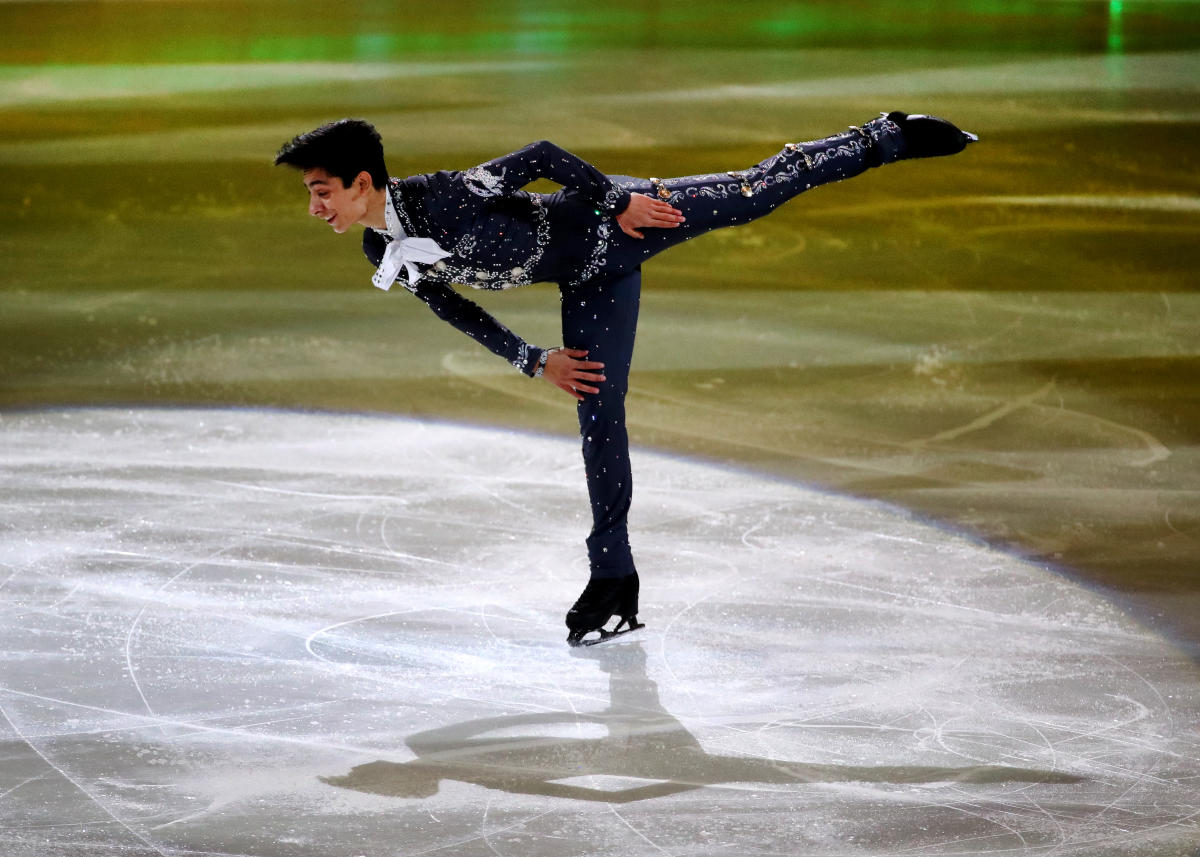 Donovan's IG is blowing up in followers! Almost 78K and growing. I think he's gained almost 30K since Worlds.

Tuning up my Body of Work

Hopefully many of them can support him with some $$$

Braulio said:
Hopefully many of them can support him with some $$$

Absolutly! Although it seems like he's getting a lot of endorsement deals and sponsorships.

Donovan's latest Instagram stories show a lovely 4S+3T and a clip of him working on choreography with Danil Gleikhengauz.

Sergei Dudakov and DG are in Mexico City (Ice World Santa Fe) for a seminar from May 1-11.

Donovan's IG Stories show him in Italy at a Benoit's camp. I'm hoping that Benoit will do his choreo.

In 2022, Donovan Carrillo will become the first Mexican skater in 30 years to represent his country at an Olympic Winter Games.

Carrillo and his coach have decided to keep last season’s free skate (“Perhaps, Perhaps, Perhaps” by Osvaldo Farrés and “Sway Mix” by Pedro Infante) but will rearrange parts of the program. “Because I love the songs I feel like I can still give so much more to that program,” said Carrillo. “For the short, we are going to collaborate with a choreographer whom I greatly admire. It will be something very different from what I have skated before but that challenge excites me a lot.” Though Carrillo did not name the choreographer, he is currently attending Benoît Richard′s summer camp in Courmayeur, France.
Nuñez said the technical content for his student′s programs next season has been decided: one quad in the short and two in the free. “Donovan is a very balanced skater, but I think there is always something to improve and that is why we will focus on improving the component part, and work mainly on his skating skills.”
Click to expand...

Carrillo is excited about his Olympic opportunity for a number of reasons, but the fact that his parents are planning to go to Beijing to watch him compete outranks all others. “They have it in their plans, although we are still not sure whether events with the public will be allowed on that date. But I really hope so because my parents have never been able to travel with me to international competitions outside of Mexico. It would be something very special for me to know they are living my Olympic dream with me.” [...]
While many skaters will retire post-2022, Carrillo said that is not in his plans. He intends to continue competing as long as his body allows it and that he takes good care of himself “to be able to prolong my career as a skater for many more years.”
Click to expand...

At the end of the article, his coach Nuñez mentioned he was planning for Carillo to start his season at the "Philadelphia Summer International in July" (they've competed there before), but since Philly will not be an international this year, perhaps they will consider attending the new Cranberry Cup senior international (August 12-15) near Boston instead?

Re-posting @BittyBug's link here from the 4CC entries thread (Donovan is no longer listed for the comp.):

BittyBug said:
... here’s an LA Times article on Carrillo. I had no idea he trained under such challenging conditions.
Click to expand...

Defying the odds, a Mexican figure skater will compete in Olympics by BY KEVIN BAXTER (JAN. 11, 2022): 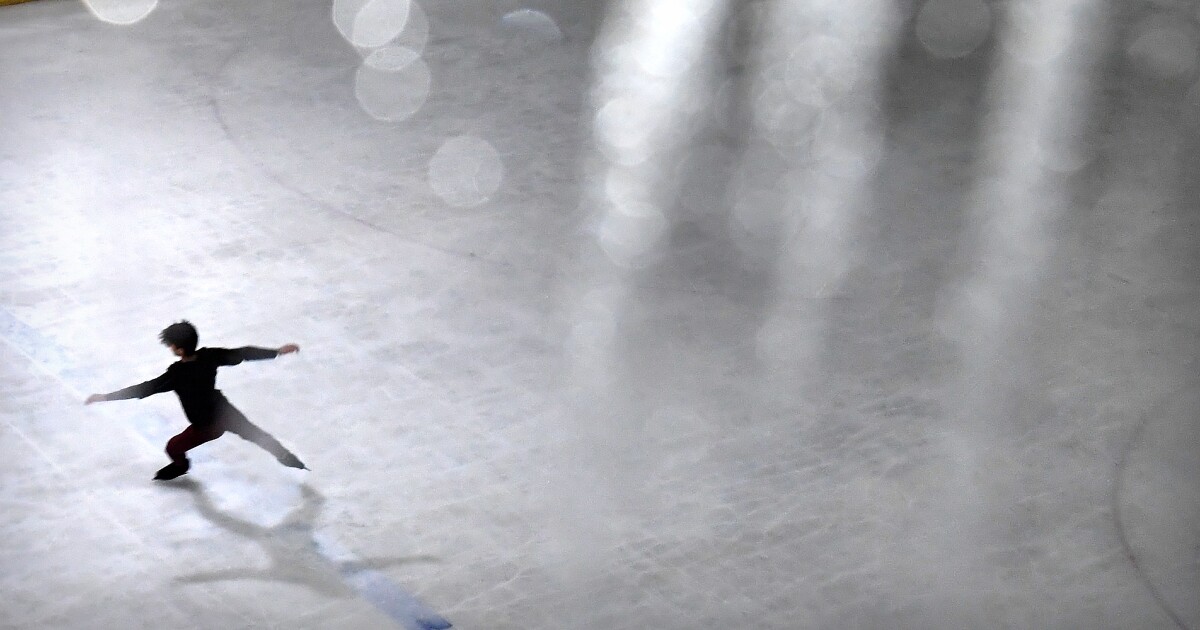 Defying the odds, a Mexican figure skater will compete in Olympics

Donovan Carrillo, who is the best ice skater in Mexican history and trains at a shopping mall rink, is headed to Beijing. It's taken lots of perseverance.

All that could change next month in Beijing, where the 22-year-old Carrillo will become just the fourth Mexican figure skater — and first since 1992 — to compete in the Winter Games, the latest twist in a complicated, quixotic journey that began with an ice-fated, grade-school romance.
“People at the beginning were laughing at me,” he said. “But I’ve accomplished multiple things for me and for my sport and for my country. At some point, people are going to see that they were wrong.”
The Ice Sport Center, hidden in a corner of the Plaza Mayor mall, is as dark and dank as a coal mine, with a rink less than two-thirds the size of an Olympic-sized surface. Yet twice a day, Carrillo makes the 15-minute drive there from the house he shares in León with Gregorio Núñez, the only coach he has ever known, hooks a breadbox-sized speaker to his cellphone and skates to Santana’s “Black Magic Woman” and “Shake It,” the songs he will use in his 2-minute 40-second short program in Beijing.
Click to expand...

Skating, it turned out, was a perfect fit. With its jumps and turns, the sport matched his personality and his lithe, graceful 5-foot-6 build. The body control and strength he developed through diving and gymnastics gave him a solid foundation for skating, while the musical interpretation provided something the other sports lacked.
As a child, he had natural rhythm and could dance to anything, from the romantic boleros of Luis Miguel to the bland pop-rock of boy bands such as the Backstreet Boys. Skating added that final element.
“I was missing the passion, the artistry,” he said. “With skating, I could use my whole package: my strength, my flexibility, my mind, my emotions.”
Click to expand...

Núñez had long mentored his prize pupil for free, but as Carrillo progressed, expenses spiraled, threatening to end Carrillo’s career before it had really gotten started.
So three years ago, Carrillo launched an online crowd-funding campaign. Only then did the Mexican government step up with CONADE, the cabinet-level ministry responsible for promoting physical education and sport, making Carrillo the first winter sports athlete to receive its support for training.
But other than an equipment deal with Italian skate-maker Edea, Carrillo still has no major corporate sponsors, and the money he receives from the government is pocket change compared with what other athletes in more established sports receive. That’s forced him to get creative, as he did for the Mexican national championships in November, in which he wore a costume made by a group of mothers whose children take skating lessons from Núñez.
Click to expand...

The country’s figure skaters have fared little better: the most successful of the three Olympians was Ricardo Olavarrieta, who in 1988 finished 27th in a 28-man field.
Even so, just qualifying for the Games places Carrillo among the standouts in the sport.
“Donovan has shown that despite how complicated it is, it is not impossible,” Núñez said. “When you dream something and fight for that something, and you believe in it, sooner or later life adjusts and you get that prize.”
Click to expand...

Just saw the LA Times article also was posted in the OAS news thread in GSD along with this one:

MsZem said:
And the Olympic channel:

Watch now the story of Donovan Carrillo, first figure skater from Mexico to qualify for the Olympics in 30 years, to make his debut at Beijing 2022.

olympics.com
Donovan and his coach are amazing

Wow, that Olympic Channel video really brings his difficult training conditions to life. It's amazing what he has accomplished despite his lack of resources.
You must log in or register to reply here.